Marc Marquez's victory at the Aragon GP puts his 2018 title bid firmly on track. The Spaniard, who rode a strong race, outdid Ducati rider (and title rival) Andrea Dovizioso to take a fine win at Aragon. It was a race that saw Marquez's other title rival, Ducati's Jorge Lorenzo, crash out in a grizzly high-side. Lorenzo's pole position wasn't of much use to him come Sunday, with the Ducati rider crashing out at Turn 1, after a tussle with Marquez. It was an incident that left Lorenzo with injuries to his right foot, and also left him very angry with Marquez, who he described as having "block pass"ed him. It also was Lorenzo's second fall in as many races, with the Spaniard having ended in the gravel at Misano as well.

While Dovi managed to lead the race for most of the way, there was some swapping of positions between him and Marquez. The Honda rider managed to move into the lead at Lap 14, but then was overtaken by Dovizioso once again on the 16th lap. On the 19th lap, things got heated up once again, with Marquez taking the lead, only for Dovi to fight back, pushing Marquez wide. This briefly allowed Iannone into second, although Marquez managed to get back into second place soon enough. 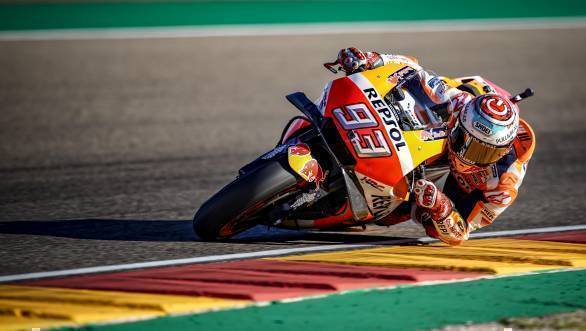 On the 21st lap, though, Marquez managed to move back into the lead, and despite Dovi's attempts at retaliation, they were brief and ineffective. Over the course of the final two laps, Marquez managed to run away to victory. His win over Dovi by 0.6 seconds mean that he now leads Dovizioso by 72 points. The Ducati rider has now conceded defeat, saying it is impossible to score as many points as needed in order to snatch the title away from defending champion Marquez. 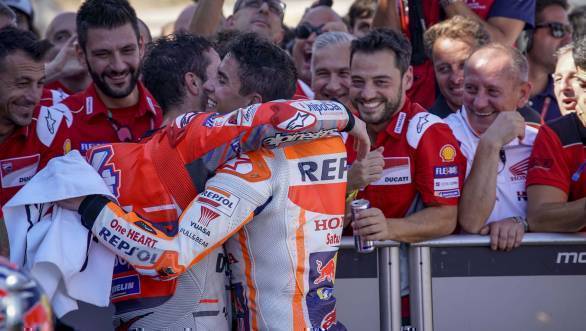