Despite having one injured rider, Movistar Yamaha had an excellent qualifying session at the Aragon GP. Maverick Vinales took pole position for the team, setting the fastest lap time all afternoon - 1min 47.635sec. 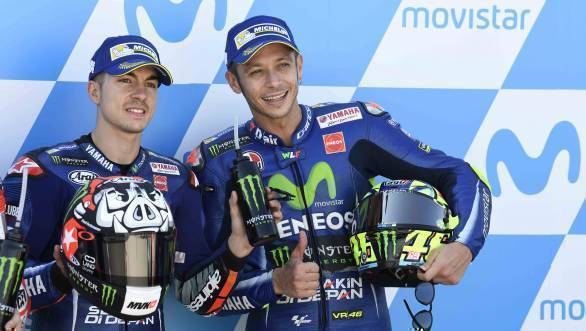 The big surprise came courtesy his team-mate, Valentino Rossi, who was riding a little over 20 days after breaking his tibia and fibula, who took third spot on the grid, with a timing of 1min 47.815sec. Splitting the two Yamaha riders was Ducati's Jorge Lorenzo, who qualified second-fastest (1min 47.735sec).

Indeed, it looked like it was going to be Repsol Honda's Marc Marquez who would be on pole position at Aragon, however, the Spaniard fell on his very last run, and thus was relegated to fifth position on the grid. This was one spot behind LCR Honda's Cal Crutchlow, who took fourth position. The second Repsol Honda of Dani Pedrosa completes the second row of the grid, with a sixth-fastest qualifying time.

Tenth on the timesheets went to Andrea Iannone, with Johann Zarco eleventh, and Mika Kallio taking the twelfth spot on the grid.