It was the race that almost didn't happen. The rain came down on the track, not by the bucketload but little trickles here and there, rendering the surface of the Losail International Circuit in Doha, Qatar slippery. After many delays it was finally decided that racing would begin, with two warm up laps to help the riders, well, warm up. And so the 2017 season of MotoGP began. 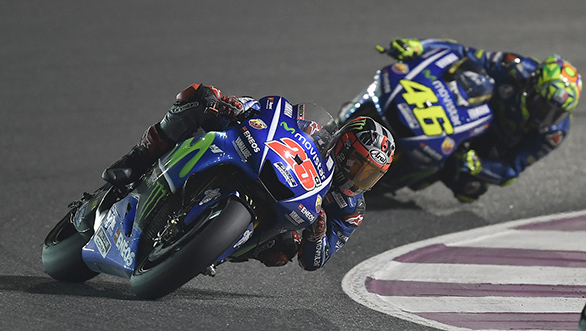 When the five red lights went out and racing was finally underway, it was Frenchman Johann Zarco who managed to come through the order and move into the lead. The double Moto2 champion (2015 and 2016) Zarco pushed his Tech 3 Yamaha to the head of the order, and opened up the gap to the chasing pack. He maintained his lead till the seventh lap, when, unfortunately, he crashed out of the race. Later Zarco would say that he felt pain in his heart at the loss. Completely understandable given that he might have claimed victory on his MotoGP debut.

This meant that the lead went to Andrea Dovizioso astride the new Ducati GP16. Behind him, a battle for second place was being waged between Marc Marquez on the Repsol Honda and Andrea Iannone on the Suzuki. However, Marquez's decision to opt for the softer tyre came back to haunt him, and he was no match for his rivals. Maverick Vinales, who had started the race on pole, soon got past the reigning world champion, as did Valentino Rossi, while Iannone crashed out. Which meant that the top three were Dovizioso on the Ducati, followed by the two Yamahas.

If pre-season testing was a measure of Vinales' power, the confirmation of exactly that came during the race. On his first ever Grand Prix astride the Yamaha M1, the Spaniard battled skillfully, aided by the fact that the softer rear tyre on Dovi's motorcycle was a cause for concern for the Ducati rider. And after some sparring, it was clear that Vinales was unlikely to be passed again.

So Vinales won on his debut for Yamaha, a sign of things to come this year. While Dovizioso had to settle for second place, and Rossi took a happy, if surprising, third. Marquez finished fourth, while Jorge Lorenzo had a dismal debut for Ducati, finishing down in eleventh.