Marc Marquez claimed a fourth MotoGP world championship title, after a third-place finish at the Valencia season-finale. Marquez, however, had a little bit of breathing room, and only needed an eleventh-place finish, even if title rival Andrea Dovizioso finished first at the race. With Dovi crashing out, though, there was no danger left to Marquez's championship hopes. 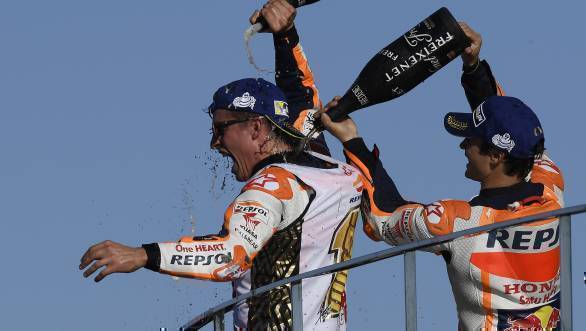 Marquez is now the youngest rider to win four premier class titles. He has a total of six world championships across all categories, all claimed in the span of 10 years.

Dovi, Marquez's title rival, crashed on Turn 8 of the track, with just six laps to go. His Ducati team-mate Jorge Lorenzo also crashed on the same lap. For a large portion of the race, it was Dovi sitting in fifth, with team-mate Lorenzo ahead of him in fourth. And while Ducati did have instructions on Lorenzo's pitboard, asking him to let his team-mate through, he chose to ignore them. This possibly meant that Dovi was denied the opportunity to pile on the pressure on his title rival.

That pressure, however, came courtesy Zarco. Marquez, having passed Zarco for the lead, had a huge moment at Turn 1. He managed to avoid crashing (a spectacular save at that), although a trip to and from the gravel cost him time, and saw him pushed down to fifth. Soon after, however, both Ducatis were out of the race, which meant that Marquez's title was safe.

The battle between Zarco and Pedrosa was worth watching, with the Frenchman trying hard to claim his maiden win in the MotoGP class. And while the duo traded places a couple of times, Pedrosa took the lead on the final lap, taking victory by three-tenths of a second. While Zarco needs to wait to celebrate his debut MotoGP win, perhaps it will come in 2018, Marquez, with third, was able to celebrate a fourth MotoGP title.