Repsol Honda rider Marc Marquez won a thrilling Aragon GP, grabbing his fifth win of the season but more importantly raking a 16 point lead in the championship. Going into the race, Marquez was tied on points with factory Ducati rider, Andrea Dovizioso and it was quite an important race for both riders. 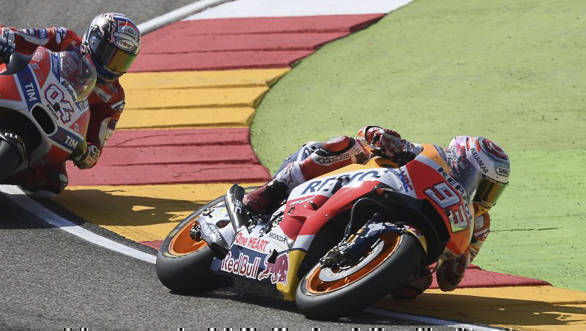 As the lights went out, Ducati rider Jorge Lorenzo, who began from P2, made an incredible start, moving into the lead after the first corner. Movistar Yamaha's Valentino Rossi, who was back on his M1, just 24 days after breaking his leg in a motocross accident suffered a bit of wheel slip at launch, but quickly recovered to grab P2. His teammate and title hopeful Maverick Vinales, who began on Pole, made a poor start and fell down the order as the laps progressed. 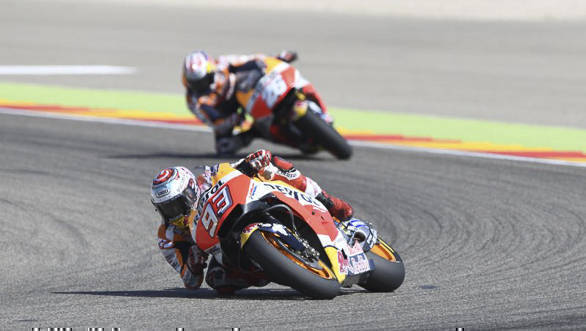 Marquez was out of reach for the late charging Pedrosa

Marc Marquez, meanwhile was engaged in a battle with Andrea Dovizioso, who had made an incredible start. The two exchanged places until Marquez managed to pass and put a sizeable gap between him and the Italian.

Marquez was soon gaining on Rossi, who was hot on the heels of Jorge Lorenzo, who was one of the few riders on the soft option rear tyre. At one point, Marquez did get past Rossi but he was carrying too much speed into the corner. In fact, at that point, he had so much momentum that he also streaked past Lorenzo on the brakes, before running out wide into the run-off area.

The Spaniard, however, managed to recover quickly and passed Rossi to begin chasing Lorenzo. Marquez seemed in his element and was all over the back of Lorenzo in the next couple of laps. At one point, he did have scary moment, when he momentarily lost the front at the corkscrew. He then made a move before the last set of corners and passed Lorenzo for the lead. From then on, there was no catching him. 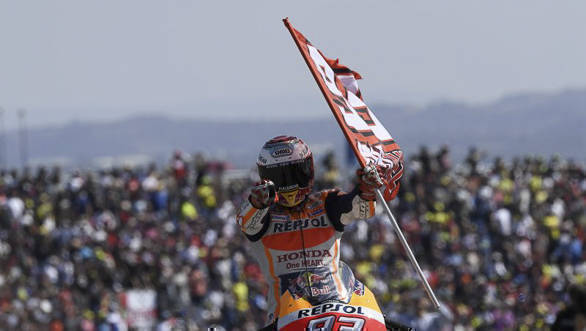 Rossi, meanwhile, was coming under pressure from Dani Pedrosa, who mounted a late charge for the podium. Rossi, despite the pain in his leg, was riding his heart out and thwarted a few attacks by Pedrosa. The Spaniard, eventually passed Rossi down the back straight, in a spectacular 300kmph+ pass. Pedrosa also passed Lorenzo for P2, finishing the race 0.879 seconds behind Marquez. Jorge Lorenzo finished third, over 2 seconds behind.

Maverick Vinales made a late recovery, finishing fourth after a small scrap for positon with his team mate, Rossi who finished a commendable fifth, considering his injuries. . Aprilia Racing Teams Gresini's Aleix Espargaro finished a brilliant sixth. Andrea Dovizioso has dismal race, finishing at the seventh spot. It was more of damage limitation for the Italian and his title chances as he was continually under pressure from the rest of the pack. 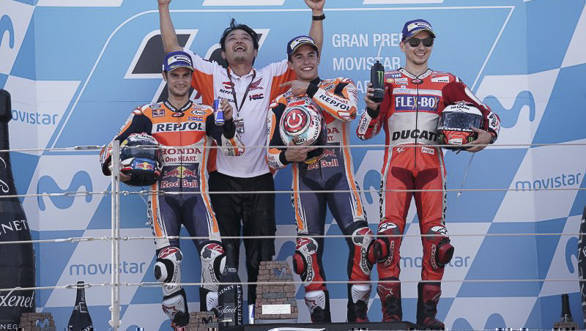 It was an all Spanish podium at the Aragon GP

With four rounds to go, the championship was still wide open. The next round will be held at the famous Motegi circuit in Japan on October 15, 2017 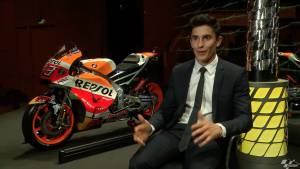 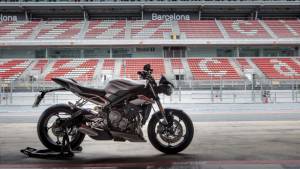 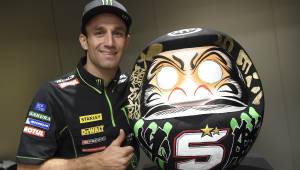