Repsol Honda's Marc Marquez will start the Valencia MotoGP, the season finale of the 2017 season, from pole position. This, despite the fact that he suffered his 27th fall of the season on Saturday.

Marquez heads into the season finale with a 21-point lead over Andrea Dovizioso, who is his title rival. Unfortunately for Dovi, the Ducati rider could only qualify down in ninth position. 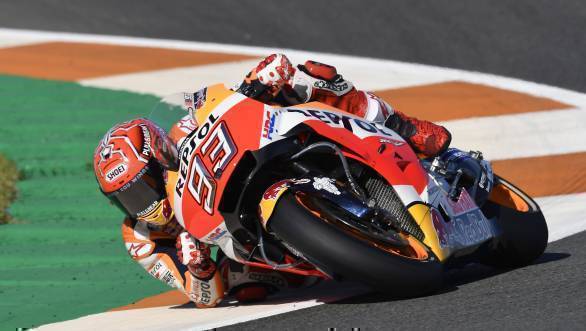 Second place in qualifying went to Monster Yamaha Tech 3 rider Johan Zarco. The Frenchman will be joined on the grid by Suzuki Ecstar's Andrea Iannone.

The second row of the grid sees the first of the Ducatis, with Jorge Lorenzo (who escaped without injury despite falling on the final corner), line up fourth, with Honda's Dani Pedrosa fifth on the grid, and Michele Pirro sixth.

Valentino Rossi lines up seventh on the grid, with Aleix Espargaro eighth, and Dovizioso ninth. Alex Rins, Pol Espargaro and Jack Miller line up 10th, 11th and 12th, completing the riders who made it to Qualifying 2.