The qualifying session at Jerez for the fourth MotoGP round came to an end today with Repsol Honda's Dani Pedrosa clinching pole position. He managed to take P1 by going 0.049s quicker than teammate, Marc Marquez, for their home Spanish GP. At the fag end of the qualifying session, Marquez waited for Pedrosa to leave the pits first so he could tuck in behind him. But Pedrosa, who was second until then, set the fastest lap and backed off, sending Marquez out alone on the final lap. Although Marquez was faster than his teammate through the first three sectors, a rear wheel slide at Turn 12 saw him lose P1. LCR Honda's Cal Crutchlow managed to take P3, to make it an all-Honda front row. 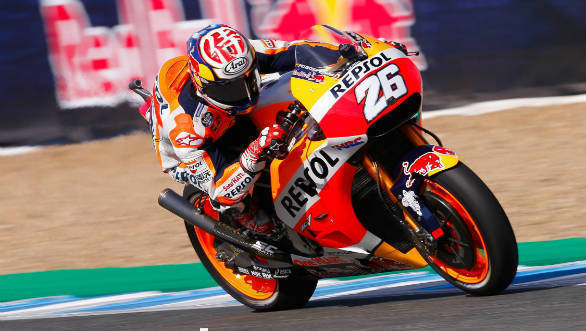