Andrea Dovizioso and Marc Marquez made every single minute of the 2017 MotoGP Japan round at Twin Ring Motegi worth watching. In a classic battle, reminiscent of their duel in Austria earlier this year, the pair of riders sparred with each other lap after lap towards the end of the race. The racing was close and dramatic, and in the end, it was Dovi who came out on top. The Ducati rider took a dramatic win, by 0.249 seconds at the very end of the last lap of the race. This enabled him to narrow the gap to championship leader Marquez to just 11 points. It is Dovizioso's fifth win of the season. Dovizioso and Marquez battle it out at Motegi

Early on in the race, Dovi and Marquez stalked initial race leader Danilo Petrucci. While Dovi managed to get past Marquez twice, it was the Repsol Honda rider who was ahead on the penultimate lap of the race. But Dovi swept past into the lead once again. And while Marquez almost managed to get into the lead at the end, it was Desmo Dovi who reigned supreme.

After the race, Marquez went over to congratulate his Italian rival, acknowledging the fact that their racing had been close and clean.

Danilo Petrucci had to settle for third place, ahead of the two Suzukis of Andrea Iannone and Alex Rins. Dovi's team-mate Jorge Lorenzo finished the race sixth, while Aleix Espargaro ended seventh. 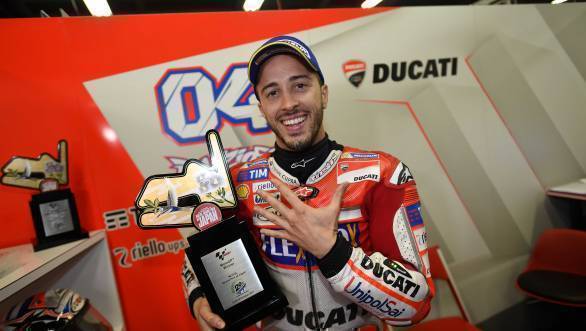 Fifth win of the 2017 MotoGP season for Andrea Dovizioso

Valentino Rossi, who attempted to soldier on despite his fracture (that hurt him after a fall during practice) was one of the race's early retirements. A ninth-place finish for Rossi's team-mate Maverick Vinales means that he is unlikely to claim the championship title this year. Marquez leads the championship with 244 points, Dovi is second with 233 points, and Vinales, is third with 203 points. Three races remain - Australia, Malaysia and Valencia.