Andrea Dovizioso took a fine victory at the Italian Grand Prix, in front of his home fans at Mugello. The Italian rider, astride his Ducati GP17, claimed the Italian team's first win at the track since Casey Stoner won there for them in 2009. It was to be Dovi's first win in the dry in MotoGP's premier class. What made the victory even more heroic was the fact that Dovi was ill, suffering from a bout of food poisoning so bad, that he couldn't take part in morning warm-up. Despite this, he claimed victory from second-placed Maverick Vinales, who was 1.281 sec adrift, and third-placed Danilo Petrucci. 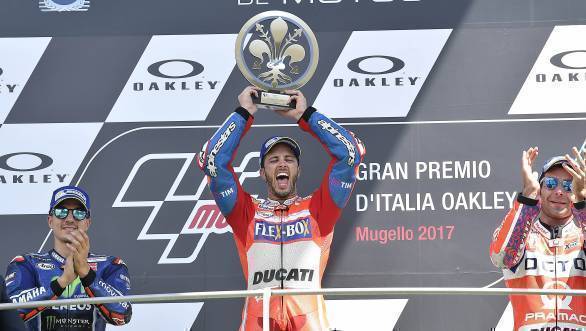 Andrea Dovizioso celebrates victory at the Italian GP, as Maverick Vinales and Danilo Petrucci look on

Yamaha rider Vinales had managed to take his second-place finish, after he increased the gap over Pramac Ducati rider, Petrucci. In fact, it was Petrucci who managed to impress, catching and passing Yamaha's Valentino Rossi. Although Rossi had managed to battle it out at the front of the pack through the race, he eventually finished fourth, 1.3 seconds away from Petrucci, still suffering from the after effects of a motocross accident that left him with chest and stomach injuries. 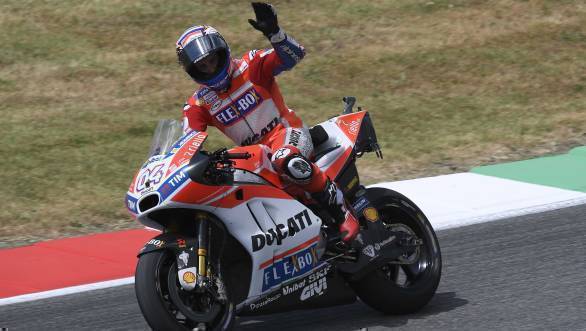 Alvaro Bautista rode impressively to finish fifth for Aspar Ducati, while reigning champion Marc Marquez could do no better than sixth place. He was the best-placed Repsol Honda, with team-mate Dani Pedrosa crashing on the last lap after a badly timed move on LCR Honda's Cal Crutchlow. 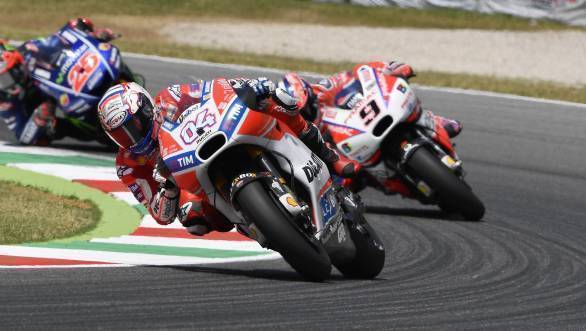 Maverick Vinales now leads the championship by 26 points from Andrea Dovizioso. MotoGP will now head to Catalunya for the race in a week's time.