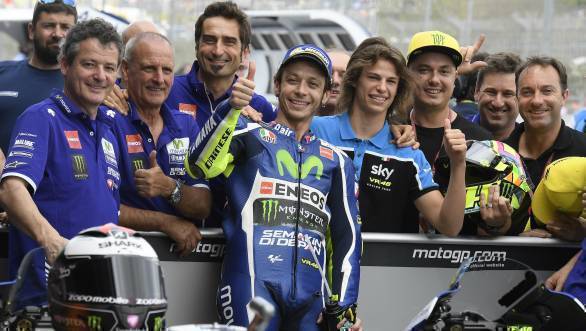 It's been a decade since Valentino Rossi took pole position at Jerez. The Italian rider, who last claimed pole at the Spanish track in 2005 managed to get to the head of the grid once again, in what also is his first pole in nearly one whole year. His last pole was at Assen in 2015.

Even though Repsol Honda's double world champion Marc Marquez looked like he might just snatch pole from Rossi, it didn't happen, with Marquez having to settle for third after a botched up final sector. Lorenzo, Rossi's Yamaha team-mate, unhappy with his last tyre choice, which he said meant he struggled for grip in the corners, made it to second on the grid, 0.122sec behind Rossi's pole time of 1min 38.736sec. Marquez is 0.155sec behind the leader.

The second row of the grid will see Ducati's Andrea Dovizioso line up alongside the two Suzukis of Maverick Finales and Aleix Espargaro.

Row three of the grid is headed by the Repsol Honda of Dani Pedrosa, with Tech 3's Pol Espargaro lining up alongside him in eighth, and Hector Barbera ninth. Cal Crutchlow completes the top 10.