Valentino Rossi will start the 2016 Japanese MotoGP round from pole position. The Italian rider, still fighting for the 2016 MotoGP title, narrowly edged out his Repsol Honda rival Marc Marquez, to claim top spot at Motegi. Marquez, who currently leads the championship standings, lines up second on the grid. Rossi's Movistar Yamaha team-mate, Jorge Lorenzo, completes the first row of the grid, having clocked the third fasted time. 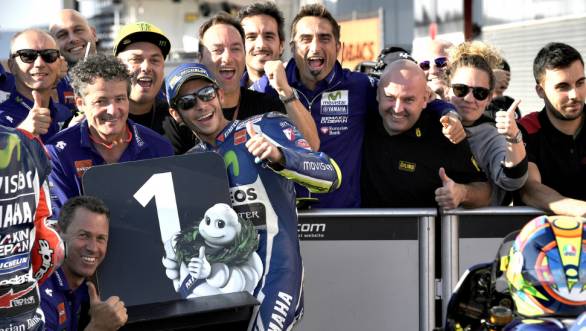 Rossi's lap for pole saw him set a time of 1m 43.954s, which meant he edged Marquez out by 0.180s. It was his 64th grand prix pole - he now equals Marquez and Lorenzo, each of whom has the exact same number of GP poles.

It was Marquez, however, who was on provisional pole until Rossi swept to the top of the time sheets. The Spaniard, who is 52 points ahead of Rossi in the championship standings, had clocked a time of 1m 44.134s, but his final flying lap was scuppered when he had to slow down while marshals removed Cal Crutchlow's stricken motorcycle from the track.

The second row of the grid is headed by Andrea Dovizioso, who clocked a time of 1m 44.294s on his factory Ducati GP16. Lining up alongside Dovi, is Crutchlow, who took fifth on the grid despite his his fall. Suzuki's Aleix Espargaro took sixth place on the grid with a lap of 1m 44.494s.

Maverick Vinales was the second-best Suzuki, heading up the third row of the grid, with Hector Barbera, astride the second Ducati, slotting in at eighth place. Pol Espargaro took his Monster Tech3 Yamaha to ninth on the grid.