MotoGP 2016: New lap record and pole for Lorenzo at Misano

"It was maybe the best lap of my life."

So spoke Jorge Lorenzo after the qualifying session at Misano, for the 2016 Grand Prix of San Marino and Riveira de Rimini. The Spanish MotoGP rider claimed pole position at Misano, after he broke the lap record at the track on his first outing in the session, and then proceeded to go even faster, setting a lap record of 1min 31.868sec on his final outing at the track. This pole marked Lorenzo's 64th top spot start in MotoGP, also a new record. 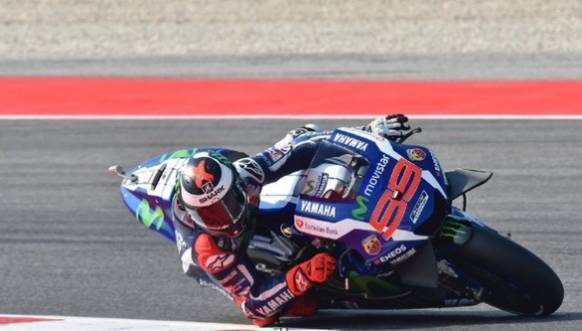 The only rider who was able to get within a half a second of Lorenzo was his Yamaha team-mate Valentino Rossi. Lining up third on the grid, completing the front row, was Yamaha-bound Maverick Vinales, fresh from his win at the British round of the championship last week.

Marc Marquez had to settle for fourth place on the grid, having missed out on the last lap by a few seconds. Fifth place went to Michele Pirro, filling in for the injured Andrea Iannone. Pirro outpaced his Ducati team-mate, the more experienced Andrea Dovizioso.

Cal Crutchlow will start tomorrow's race seventh on the grid, while Repsol Honda's Dani Pedrosa had to settle for eighth, with Aleix Espargaro ninth on the second Ecstar Suzuki. Brother Pol Espargaro, Hector Barbera and Alvaro Bautista completed the fifth row of the grid.