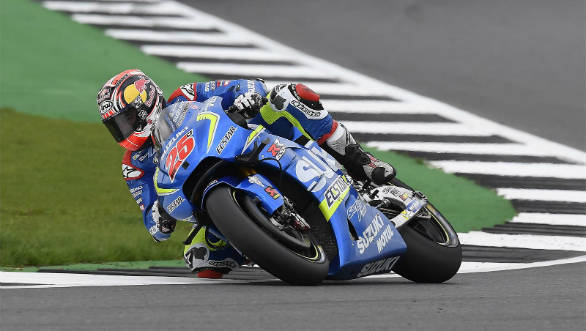 Maverick Vinales took his very first victory in MotoGP's premier class with what was a very strong ride at the British MotoGP round at Silverstone. Vinales claimed the lead in the race (restarted after the first lap crash of Pol Espargaro and Loris Baz) and ran away at the head of the field.

The Spaniard managed to put a gap of as much five seconds between himself and the chasing pack, on his run to the chequered flag. The feat of crossing the chequered flag first, other than giving him his first MotoGP win, also meant that he gave the Suzuki team their first win since the 2007 season.

Pole man, Cal Crutchlow, who was fresh from his victory at the last round at Assen, did well to finish second, albeit over three seconds behind the Suzuki. Crutchlow managed to make his way past Marc Marquez towards the end of the race. With Marquez running wide when trying to get past the LCR Honda, eventually having to settle for fourth place.

The Repsol Honda rider's mistake at the end of the race provided the opportunity that Valentino Rossi needed in order to get onto the podium. Marquez wasn't the only rider to slip up at the end of the race, with Andrea Iannone crashing out of second place on his Ducati. Dani Pedrosa managed to claim fifth place, while Rossi's Yamaha team-mate, Jorge Lorenzo finished eighth.

Marquez now leads the championship by 50 points, with Rossi second.