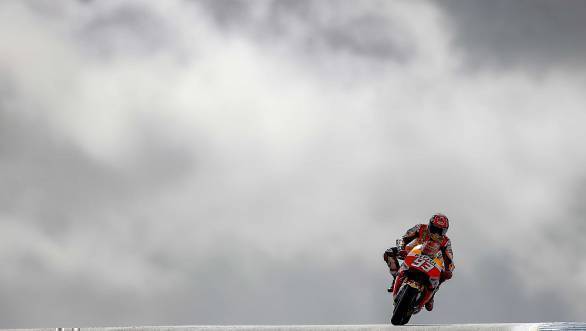 It was a historic 65th pole position for Marc Marquez, the recently crowned world champion, at Phillip Island. Marquez was one of the few riders to switch to slicks at the track, taking advantage of the fact that the circuit was drying up. This meant that he managed to end the session 0.792s ahead of LCR Honda's Cal Crutchlow.

Third place on the grid, completing the front row, was Tech3's Pol Espargaro. The rider prevented home hero Jack Miller from taking a front-row start at tomorrow's race. Miller had to stay content with fifth place on the grid, after Aleix Espargaro took fourth for Suzuki. Completing row two was Danilo Petrucci astride his Pramac Ducati.

Heading the third row of the grid is Nicky Hayden, on his MotoGP return for Honda, while Stefan Bradl took eighth place ahead of Ducati riders Andrea Dovizioso and Hector Barbera. Scott Redding and Jorge Lorenzo took 11th and 12th place, completing the Q2 order.