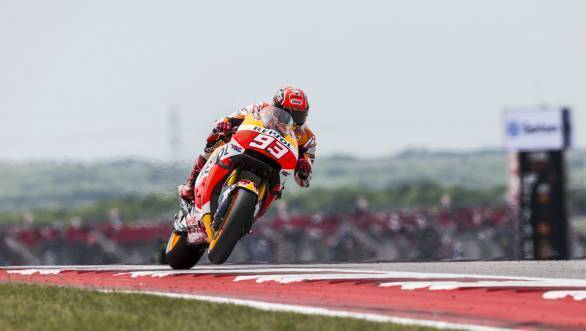 Marc Marquez claimed his fourth consecutive pole position at the Circuit of the Americas, with the fastest qualifying lap at the 2016 Austin MotoGP round

Can Marc Marquez take his fourth consecutive victory at the Circuit of the Americas? It could well happen, given that the Repsol Honda rider has managed to take his fourth straight pole in Austin.

Marquez clocked the fastest time during qualifying, with a timing of 2min 03.188sec on his first flying lap. He thus displaced Jorge Lorenzo from provisional pole, which the reigning world champion had held onto during the initial stages of the session. Lorenzo, who ended the session a mere 0.069sec off Marquez's pace had to settle for second spot on the grid.

Lining up alongside them on the front row of the grid, is the second of the Yamahas, with Valentino Rossi ending qualifying 1.1sec slower than pole-man Marquez.

The second row of the grid sees Ducati's Andrea Iannone in fourth place. Indeed, Iannone will be hoping to perform better at COTA, after his last corner crash at Argentina last week. Joining him on the second row, are Suzuki's Maverick Vinales who set the fifth fastest time of the session, and Cal Crutchlow who was sixth fastest.