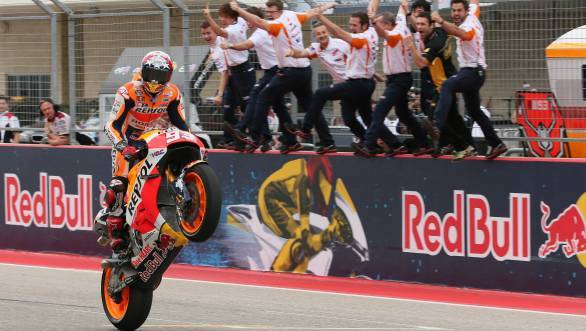 Marc Marquez celebrates his fourth consecutive victory at the Circuit of the Americas, as his Honda team cheers from the pit wall

Marc Marquez continued his absolute domination of the Circuit of the Americas, registering his fourth consecutive win at the track, and extending his lead in the 2016 MotoGP standings. Marquez now has a record of four poles and four wins at the Austin track, and is the only MotoGP rider to win at the COTA since it joined the MotoGP calendar in 2013. Finishing second to Marquez was Yamaha rider, and reigning MotoGP champion, Jorge Lorenzo. Third place went to Ducati's Andrea Iannone.

When the five red lights went out at the Circuit of the Americas, it was Marquez who was off into the lead. Following him was Andrea Dovizioso, who benefitted from the sheer speed of his Ducati, moving up the order from seventh on the grid. And while Dovi did try to make a move on Marquez on the second lap of the race, the Spaniard wasn't to be trifled with.

The man who lost out during the first lap was Valentino Rossi. While Rossi had qualified third, he slipped down the order, with both Dani Pedrosa and Aleix Espargaro moving ahead of him. His race didn't get much better two laps later, when he crashed out from sixth place. It was to be the first of many crashes of the afternoon.

The second crash came when Dani Pedrosa lost control of his RC213V on the sixth lap of the race. Pedrosa's Honda ploughed straight into the Ducati of Dovizioso, who was then in third place, knocking him off his motorcycle. While Dovizioso was immediately out of the race (for the second time in as many races, given that his team-mate Iannone took him out of the Argentine MotoGP just a week ago), Pedrosa was able to re-join the race, riding till the 12th lap after which he retired into the pitlane.

Cal Crutchlow on the LCR Honda and Bradley Smith on the Monster Tech 3 Yamaha were the next two to go, both crashing on Lap 8 of the race, that too at the very same corner.

But the chaos and crashes aside, Marc Marquez was unstoppable from lights to flag. Behind him, Jorge Lorenzo managed to make a couple of mistakes that allowed Dovi to get past him initially. However, the Yamaha rider managed to regain his second spot by the fifth lap. That's where he stayed till the end of the race, although it was 6.1 seconds behind Marquez. And once Dovi and Pedrosa were out of the picture, there was nothing to stop Andrea 'Maniac Joe' Iannone from taking third.