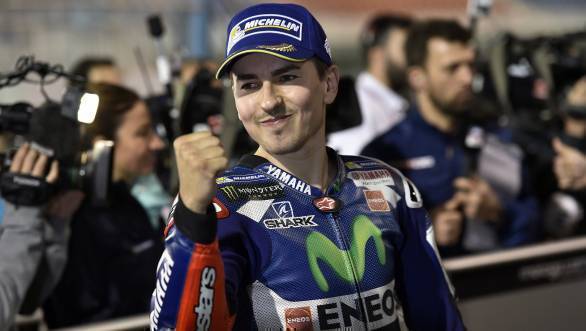 So it was at the first race of the 2016 season of MotoGP.

Lorenzo had one of his usual blazing starts, taking the lead at race start. But then the Ducati boys caught up with him. Andreas Iannone and Dovizioso managed to use the outright speed of their Ducati GP16s, blazing past Lorenzo and taking the top two places on track. But their run at the head of the pack wasn't to last forever. First it was Iannone who had a big crash on the sixth lap of the race, which meant that Dovi moved into the race lead, where he continued for a little while.

Then, on Lap 14, Lorenzo made his move and made it stick. The Yamaha rider then even began to pull away at the head of the pack. By the end of the 22-lap race, Lorenzo had managed to break his own lap record from yesterday.

Things got worse, temporarily, for Dovizioso. On the 19th lap, he slipped up, which meant that he got jumped by Marc Marquez. But at the start of the last lap, Dovi managed to dive back into second place, relegating Marquez to third. The Spaniard did try to wrestle his way back into second, but he had to eventually settle for the last spot on the rostrum. Valentino Rossi ended the race fourth.

Finishing fifth, although a good distance away from the top four, was Honda's Dani Pedrosa. Sixth place went to Maverick Vinales, who didn't quite get the start he wanted given that he qualified on the front row. Pol Espargaro took seventh place on the Tech3 Yamaha. His team-mate Bradley Smith finished eighth, while Hector Barbera was ninth and Scott Redding took tenth place.