The 2015 MotoGP World Champion, Jorge Lorenzo, broke the circuit record at Le Mans to claim pole position. The Spanish rider set a lap time of 1 minute and 31.975 seconds, making him the first MotoGP rider to lap the Bugatti circuit under 1 minute and 32 seconds. Lorenzo was slower during the practice sessions but quickest throughout the Q2 session.  This also happens to be the first time that Lorenzo has finished in pole at Le Mans. 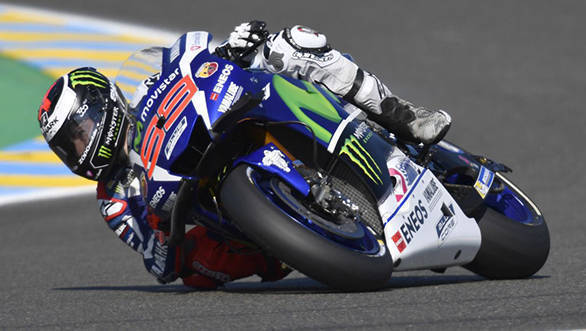 Meanwhile, Marc Marquez ran wide in his opening lap but pushed hard to claim second position. Andrea Ianone crashed in the second half of the qualifying session but quickly made it to the pit lane to hop onto the second Desmosedici GP. The Italian rider rode well to claim third position.

The top three riders' teammates, however, had a disappointing qualifying session. Valentino Rossi didn't seem to be quick and had to settle with seventh position. Dani Pederosa had a slow low-side crash and finished Q1 in 11th place. Andrea Dovizioso did better but started in fifth position behind Pol Espargaro. The Spanish rider is the only non-factory rider to make it to the top-5.