Choices made have repercussions, some favourable and some dreadfully unfavourable. That's probably what Repsol Honda rider, Marc Marquez, learnt at the Argentinian round of the 2015 MotoGP world championship. Qualifying on pole, the Honda rider opted for the hard compound tyre on the grid. A choice that would come back to haunt him in the latter half of the race. Movistar Yamaha rider, Valentino Rossi, meanwhile, opted for the extra hard rear tyre. 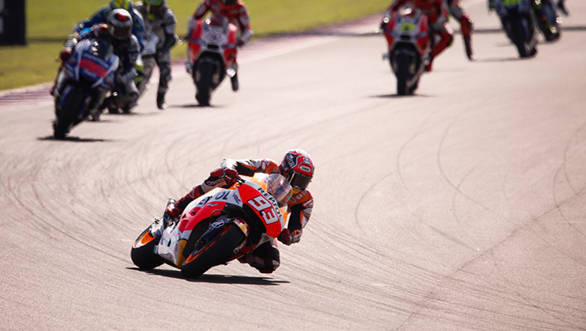 As the lights went out Suzuki rider Aleix Espargaro, leaped ahead of Marquez into Turn One. He led for a short while, before Marquez retook the lead. From then on, he began gunning the Honda around the 4.8km, Termas de Rio Hondo Circuit. Setting, fastest after fastest lap, he began pulling away from the the rest of the field. The gap at one stage was a potential race winning 4.3 seconds. 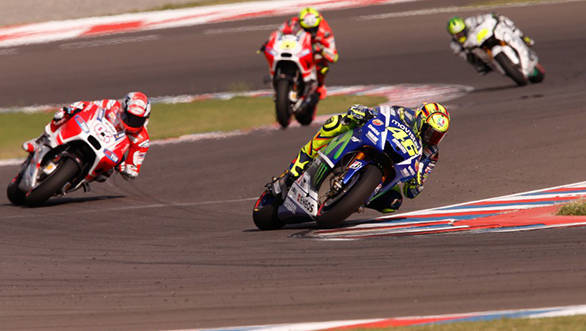 Starting from P8, Valentino Rossi rode at a consistent pace and displayed his finesse as he weaved past the field with each passing lap. The decision of choosing the extra hard rear was now shaping up as a good one. He reined in the Ducatis of Andrea Iannone and Andrea Dovizioso and the CWM LCR Honda of British rider Cal Crutchlow. After rising to P2, The Doctor then began his epic chase of Marc Marquez. With 12 laps to go, Rossi finally began shaving off crucial tenths out of Marquez' lead. 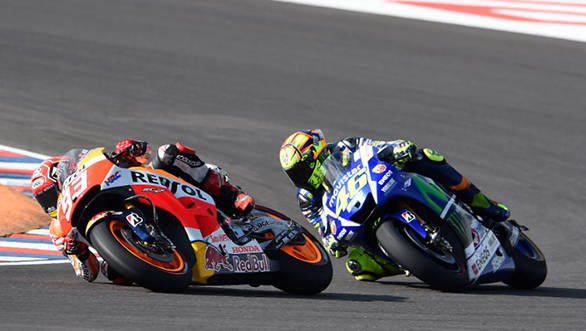 Marquez tried hard to maintain the gap, but each time he rode past his pit board, he saw the gap to Rossi diminishing. Rossi, aboard his Yamaha M1, had Marquez' RC213V in his sights. With each passing corner, Rossi gained on Marquez. Rossi's Yamaha was stronger, especially in the first sector, and that's where he managed to bite a huge chunk of the time. 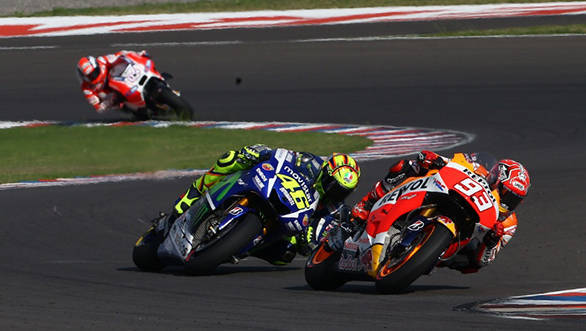 Two laps to go and Rossi's M1 was up on the RC213V's tail. On the first corner of the penultimate lap, Rossi tried to outbreak Marquez, but the Spanish rider braked deeper and much later. A couple of corners later, Rossi managed to sneak past, but he ran wide and Marquez regained the lead before the back straight.

The Honda managed to stay ahead, owing to its higher horsepower, but towards the end of the straight, Rossi managed to slipstream and outbreak Marquez into Turn Five. The unrelenting Spaniard tried to cut in and his front wheel grazed Rossi at the corner exit. And then, disaster.

Marquez was too close to Rossi and as the Italian straightened the motorcycle to pull away, Marquez's Honda's front wheel clipped the rear wheel of Rossi's Yamaha. Marquez slid down the track as Rossi kept going. The championship defender raised his hands in despair as he saw that his Honda was way too damaged to continue.

As the chequered flag was drawn,Valentino Rossi punched the air in delight as if relishing a brilliant battle. The 36-year old Italian leads the 2015 MotoGP world championship, having won two of the three races this season including a third position at the Austin GP. 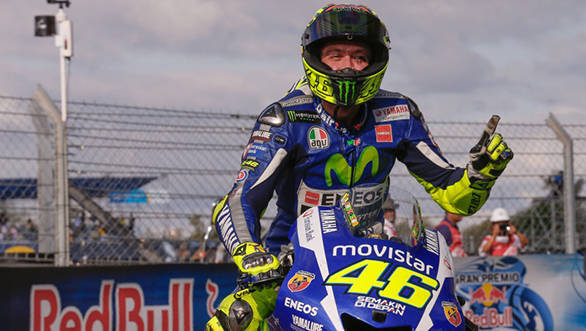 Andrea Dovizioso was promoted to P2 after Marquez retired and now stands second in the championship, trailing Rossi by 6 points.

The third position was snached at the penultimate corner by Cal Crutchlow as he took advantage of Iannone's mistake of running a little too wide. The two riders were almost side by side as they entered the final corner, with Crutchlow just managing to keep his Honda's front wheel ahead of Iannone's Desmosedici as they crossed the finish line.

Crutchlow opted for the hard compound rear, just like Marquez, but managed to conserve his tyres till the end by riding in what he later termed as an 'F1 style race'. Rossi later described the incident with Marquez in detail saying, ". . . I arrived to Marc and had six or seven tenths of advantage in the pace, but just two laps to go. So I tried to overtake him, but I think for sure now Marc will try something to stay in front. But as soon I thought about that, already he touched me in the centre of the corner. He put the bike into me and I say, 'F**k! Straight away. I think you are aggressive but I don't expect so much!"

"Then when I opened the throttle to accelerate, because I want to take a small advantage before the next braking, I hear another touch. But sincerely I don't know if it was on the right or left. But after when I passed to the line I saw on the pit board I had an advantage over Dovi, so I think something happened and the next lap I saw his bike."

He then added, "Marc knew if I overtook him I was a little bit faster so he tried everything, but maybe a little bit too much I think."

The next round of the 2015 MotoGP world championship will be held in Jerez, Spain in two weeks time.