The San Marino GP saw quite bit of drama due to constantly changing track conditions. At the front of the grid were Jorge Lorenzo, Marc Marquez and Valentino Rossi and with the warm-up lap came a light drizzle. With everyone on slicks, Lorenzo took off with a good start as the lights went out. Eventually though, the white flags were out on lap two, indicating that the riders could enter the pits to change to the bikes with wet tyres. 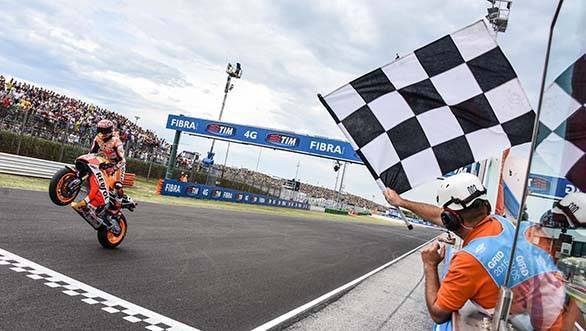 Marquez celebrates his win at Misano

As the rain continued, Lorenzo led the race with Marquez close behind as Rossi struggled in the opening laps. On lap seven, Scott Redding of Estrella Galicia 0,0 Marc VDS Racing dropped his Honda during a fight for fourth. Undeterred, he picked up his bike and rode to the pits to swap bikes. By this time, most of the riders save for the leading three - Lorenzo, Marquez and Rossi - had switched bikes. Finally though, all three entered the pit lane at the same time and as they were pulling out, Marquez almost collided with Lorenzo. 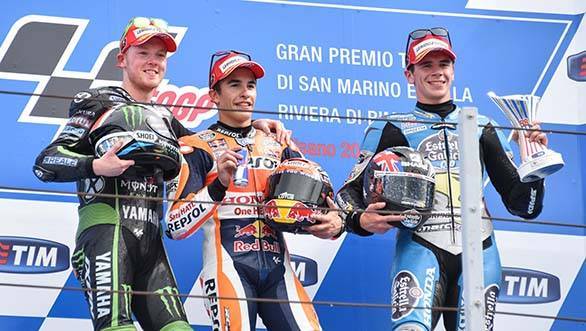 Bradley Smith and Scott Redding flank Marquez on the podium

With all three rejoining at the same time, Marquez led until Lorenzo eventually took him on turn 8. Rossi struggled with a 2.5 second gap between him and the race leaders. However, as the track began to dry, Rossi started to pick up pace as he gained a second a lap on the leaders. Slowly, all the riders started to pit to swap back to slicks while the leading three stayed out the longest. Marquez was the first of the three to enter the pit on lap 18. Lorenzo followed suit in the next lap while Rossi continued on the track. Bradley Smith (Monster Yamaha Tech 3) had earlier missed the opportunity to swap bikes and continued on slicks, a move that worked to his advantage by the end of the race. 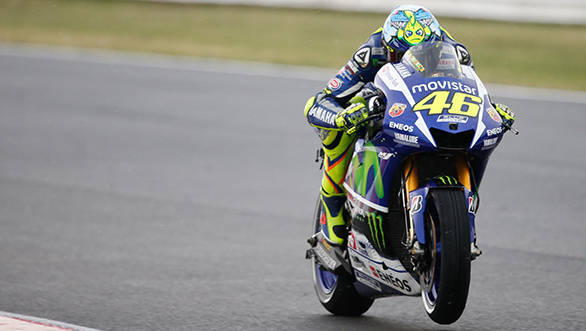 As Rossi finally entered the pit lane, Lorenzo fell at turn 15, ending his race. This incident set him 23 points behind Rossi in the championship. The positions started to settle with a few laps to go and as the chequered flag was waved, it was Marquez who took first with Redding and Smith following. This was Smith's first ever premier class podium finish. Rossi's mistake of swapping to slicks a little too late saw him finishing fifth.

However, Rossi still leads the championship with 247 points while Lorenzo and Marquez are at second and third with 224 and 184 points respectively.