With Valentino Rossi starting from last on the grid at the MotoGP finale at Valencia, it was always going to be advantage Jorge Lorenzo. But things are looking even more set in Lorenzo's favour now that qualifying is done at Valencia. Not only was Lorenzo lapping a full 1.4 seconds faster than his team-mate and title rival, who eventually crashed out during Q2, the Majorcan rider claimed pole after a lap-record shattering 1min 30.011sec time. It was a lap that he would go on to describe as the best lap of his career. 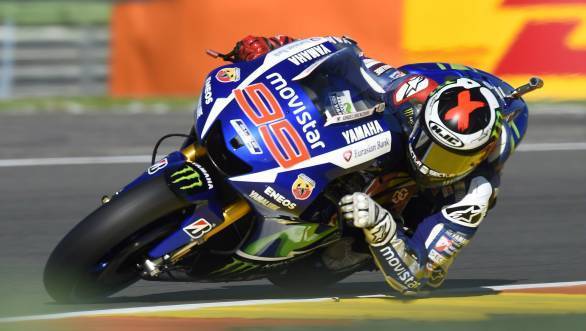 Jorge Lorenzo is on pole at Valencia, and he's gunning for the 2015 MotoGP title!

Rossi, who had said that he would give qualifying his all, despite the fact that it wouldn't change his dead-last starting position for the race, ended up crashing at Turn 8. The fact that he has to try and win the championship from the very back of the grid, with a seven-point advantage, is now even more daunting than ever. The quest for that tenth championship title is going to be as tough as it can possibly get.

But the season finale at Valencia will be influenced by so many factors other than just the two men astride those Yamaha M1s. The possibility of spoiling the race for either of the riders comes in the form of the two Repsol Hondas of Marc Marquez and Dani Pedrosa. It's these two, in that order, who will join Lorenzo on the front row of the grid, with Pedrosa seemingly back in form, and ready to try and score another win after taking victory at Motegi and Sepang.

The second row of the grid comprises Aleix Espargaro (fourth on the grid), who managed to get his Suzuki into Q2 after topping Q1 earlier in the day. His team-mate Maverick Vinales also made it to Q2, although he will start the race at Valencia 11th on the grid. Fifth place is occupied by LCR Honda's Cal Crutchlow, while sixth place on the grid goes to British rider Bradley Smith astride the Monster Yamaha Tech3.