Everyone fortunate enough to be trackside at Misano for the 2014 Grand Prix di San Marino e della Riviera di Rimini will remember the race, for it was historic. For Italian fans, that sea of yellow-wash all emblazoned with the No 46, it was memorable because their home hero, Valentino Rossi, took a commanding win at the races. And for fans of MotoGP of the non-Rossi variety, perhaps the memories will have more to do with the fact that Marc Marquez displayed a rare human side, faltering and making a mistake that cost him a potential race win.

Pole man Lorenzo got off to a good start, with team-mate Rossi chasing him down in second. Marquez, who started fourth on the grid behind Andrea Iannone, managed to get the jump on the Italian rider at the start and slotted into third place. Then it was time for the Old Master and Young Upstart to battle it out, with Marquez getting past Rossi twice, and Rossi reclaiming second position as many times, much to the delight of the Italian fans. And while Lorenzo was seemingly making progress at the front of the order, with his two rivals battling it out at the back, Rossi managed to catch up. 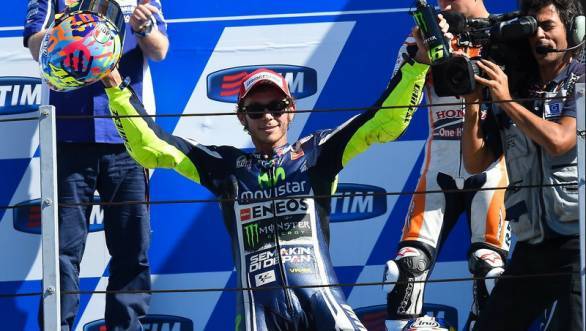 On Lap 4, Rossi got past Lorenzo to take the race lead, only to run wide and let his Movistar Yamaha team-mate back into first. But he made his move stick later on, and Marquez, eager not to let Rossi's tailpipe's out of his sight, also muscled his way past Lorenzo on T14. Lorenzo couldn't keep up with the lead pair, allowing Marquez to chase Rossi at the front of the pack.

The point at which the race changed, though, was when Marquez lost the front of his bike at Turn 4, which allowed Rossi to pull away at the front of the pack. Marquez rejoined the race, but needed to claw his way through the pack. That 12th race win that he'd been chasing after was clearly not going to happen!

At the front of the grid, Rossi was still pulling ahead of Lorenzo, the Italian fans were on their feet, and Pedrosa had managed to slot into third place, ahead of Andrea Dovizioso, who was in turn tailed by his team-mate Iannone.

And so it was that Rossi won by three seconds from his team-mate, Lorenzo, with Pedrosa third. It was Valentino's first win of the 2014 season, and the first win for the Yamaha team as well. Rossi's last race victory had come at Assen last year. This was the 35-year old rider's 81st career victory, and the points gained from the win have made him the first rider in the sport's history to hit the 5000 point mark!

Speaking of points, Marc Marquez still leads the 2014 championship with a total of 289 points, with Dani Pedrosa second with 215 points and Rossi, with 214 points, just a single point adrift.