The German MotoGP round at Sachsenring was the ninth round of an 18-round season. And by winning the race at Sachsenring, the magical Marc Marquez has won exactly one half of an entire championship. And he's managed to do so in a very dominant fashion. His ninth win means that he has broken Mike Hailwood's record as the youngest rider to win nine races in a row. And it seems very likely that he will be well on his way to winning every race this season, putting Giacomo Agostini's record in considerable danger. 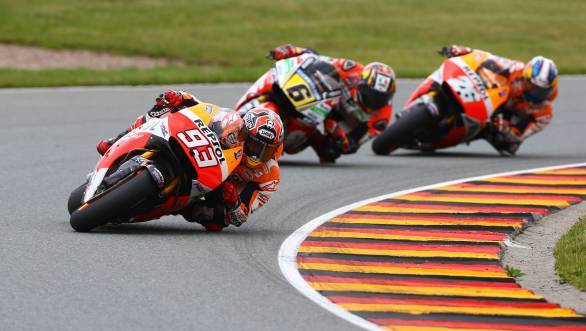 It was an all-Honda front row at Sachsenring. Needless to say, it was Marc Marquez on pole, with his team-mate Dani Pedrosa second on the grid and Stefan Bradl third. Lining up on the second row was Aleix Espargaro, with the Yamahas of Jorge Lorenzo and Valentino Rossi right behind them.

In what is possibly the most unusual start to a MotoGP race ever, at the end of the warm up lap, nearly all the motorcycles on the grid headed into the pitlane and swapped to dry motorcycles for the start. They would start the race from the pitlane, but whoever got to the head of the pitlane first was at an advantage. As you can imagine, there was a considerable amount of elbowing and shoving in the pitlane when the five red lights went out. Quite a sight!

On track, Bradl led. The best getaway from the pitlane went to Marquez. And then there was nothing much that could be done. For once Marquez set his sights on Bradl, he just set about catching him, passing him and then winning the race from team-mate Pedrosa and third-placed Lorenzo.