The name Marquez has been firmly cemented in the chapters of motorsport history. Not only has two time world champion Marc decimated nearly every record he has come across so far but his younger brother Alex added a brand new one by winning the Moto3 world championship. This is the first time that two siblings have ever won two world championships in the same year.

Moto3 was the only series that was going to be decided at the last race in Valencia. Title contenders Jack Miller and Alex Marquez qualified second and third respectively and were ready to take it down to the wire. In the typically close race, Jack Miller did the very best he could by finishing on the top of the podium but Marquez finished a very measured third, just a second and a half behind to seal the championship by two points.

Moto2 saw newly crowned world champions Esteve Rabat dominating all weekend and grabbing pole. Through the race he was closely hounded by Thomas Luthi who tried on multiple occasions to pass at the first corner but ran wide every time. It seemed entirely in the bag for Rabat when Luthi pulled a surprise move on the very last corner of the last lap to edge ahead of a disbelieving Rabat and win by the narrowest of margins. It later turned that Luthi was surprised himself and Rabat's reduction in speed on the main straight was due to shortage of fuel. 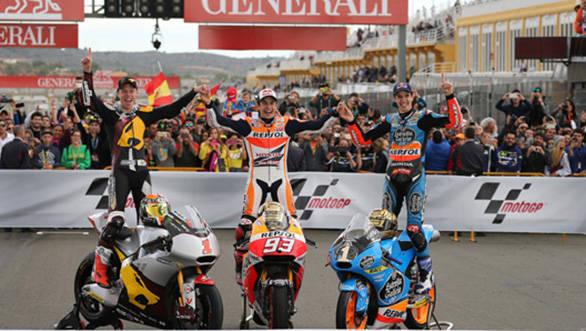 The MotoGP category saw Rossi take his first pole position in over four years with a surprise last lap attempt that put him ahead of Pramac Ducati rider Andrea Iannone and Dani Pedrosa. It helped Rossi that Marquez crashed in the closing stages of qualifying but had still managed to secure fifth position on the starting grid. Valencia was where the battle for second in the championship would be decided between Rossi and Lorenzo. At the start, the Italian had the edge over the Spaniard with Lorenzo starting in fourth spot. Almost as soon as the race started, spots of rain began collecting on the camera lenses. While it never rained hard enough to be called a wet race, the conditions became very difficult and hard to predict. Lorenzo, who was running in fourth, took a call to switch to wet tyres along with Andrea Ianone. Unlike in Aragon, the ploy didn't work out for the Spaniard and he dropped out of the top twelve. Lorenzo finally pulled into the pits with a few laps left to go as he had no chances of taking any points. This left Marquez and Rossi at the front while Pedrosa had settled into a distant third. Marquez had quickly moved up to third by the start of the race and with 20 laps to go, he confidently moved into the lead and never looked back. Rossi tried to stay with him but never got close enough. Marquez finally finished about 3.5 seconds ahead of Rossi while Pedrosa came in third, 14 seconds behind. The Ducati pair of Andrea Dovizioso and Cal Crutchlow had a race long battle and finished in a close fourth and fifth respectively, a result the Italian team is sure to be happy about. Sadly, things didn't go so well for the sole Suzuki bike on track with rider Randy de Puniet pulling into the pits with mechanical problems half way through. Hopefully the returning Japanese team will be able to improve for a stronger fight next season that starts at Qatar next March.

It was a exciting close to a fantastic season here at Valencia. With 13 wins under his belt, (Marc) Marquez has broken Mick Doohan's record of 12 wins in a season. (Of course Doohan did it in 15 races while Marquez had 18). Rossi also sealed off second in the championship while Honda has won Rider, Team and Constructor's championship. Will this continue in 2015 or will big red's opponents have an answer? Well find out at Qatar next year.