Quite the little record breaker young Marc Marquez is turning out to be. The reigning MotoGP world champion had the unfortunate distinction of never having won a Grand Prix motorcycle race at Jerez in any class in the past. Something he seemed eager to put behind him, as was in evidence from the moment he took pole position at the track. And then he set about doing what he does best - breaking down the opposition and breaking records in the process. The fact that he won the fourth consecutive MotoGP race of the 2014 season, a feat that was last achieved by Valentino Rossi in 2002, also adds to his growing list of records. And the young Spaniard did it in style, winning his 100th Grand Prix motorcycle race. 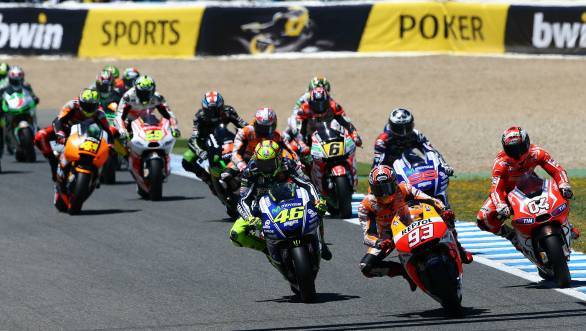 So what was the most exciting part of the race at Jerez? Well, it really was the opening lap - a lap where we got to witness young blood battling it out with the old master. As the race got underway, Rossi and Marquez fought for the lead, with The Doctor coming off better initially. There was a glimmer of hope for Andrea Dovizioso, who did manage to snatch the lead, albeit very briefly, before running wide. And while Marquez bided his time over the course of the first lap, he got past soon after, saying once the race was done that he wanted to get past Rossi as soon as possible. Then he set about pulling away from the rest of the pack.

The battle for second place would end up being fought by Rossi, Marquez's Honda team-mate Dani Pedrosa, and Yamaha's Jorge Lorenzo. And while Rossi proved to be the faster of the two Yamahas, his decision to run on the super hard tyres paying off, Lorenzo would try hard to keep up. Eventually the younger rider was forced down into fourth place as Pedrosa would muscle his way into third and remain there for the rest of the race. Attempts to catch and pass Rossi were made, and might have been successful had there been a few more laps in hand. Unfortunately for Pedrosa laps were not a luxury he had, and when the chequered flag fell it would be Marquez in front, with Rossi second and Pedrosa third. A sullen Lorenzo made his way to the garage, ignoring Yamaha team personnel who tried to pat his back in encouragement. It was no wonder that he reacted the way he did - Jerez was his 200th MotoGP race, and it was his birthday too. A forgettable way to celebrate both.

Despite his showing in the early part of the race Dovizioso could do no better than fifth, while Alvaro Bautista finished sixth and Aleix Espargaro finished seventh. Eighth went to Bradley Smith, while Pol Espargaro and Stefan Bradl rounded off the top 10.

Marc Marquez leads the championship rather comfortably with 100 points, ahead of Repsol Honda team-mate Dani Pedrosa, while Valentino Rossi, with 61 points, is third.