MotoGP 2014: Marc Marquez makes it three wins in a row at Argentina 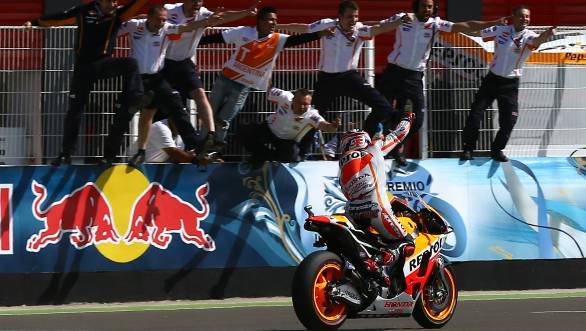 Three wins of the first three races for Marc Marquez

It was the first lap of the race that was crucial, though. Yamaha rider Jorge Lorenzo powered through into first place, with Andrea Iannone in second place, followed by Dani Pedrosa, Valentino Rossi, Marquez and Andrea Dovizioso. Rossi also found himself attacking for the race lead at the end of the first lap, however, all his hopes of getting on the podium were scuppered when Stefan Bradl ran him wide, resulting in Rossi dropping down to seventh place.

Up ahead, Lorenzo led the race for the first 17 laps. But with eight laps to go, Marquez muscled his way past Lorenzo with ease. After that, the second Repsol Honda started reeling in the Yamaha rider, and with a lap and a half remaining, Pedrosa made his way past into second place. Lorenzo had to settle for third on the grid. Finishing fourth was Rossi, none too pleased with the result, even declaring after the race that Bradl had cost him a podium. The errant Bradl finished fifth, with Iannone sixth. Bradley Smith, Pol Espargaro, Dovizioso and Hiroshi Aoyama rounded off the top 10.

Marquez leads the championship standings with 75 points, with Dani Pedrosa second with 56 points and Valentino Rossi third with 41 points.