The 2017 MotoGP Dutch Grand Prix will go down in the history books as one of the most epic and closely fought ones in the history of the sport. In a thrilling battle Yamaha Movistar rider Valentino Rossi resurrected his championship title hopes by winning the race under challenging conditions. The Doctor made brilliant start off the line, managing to slot behind Marquez and race leader Johan Zarco on the satellite Yamaha M1, going into Turn One. 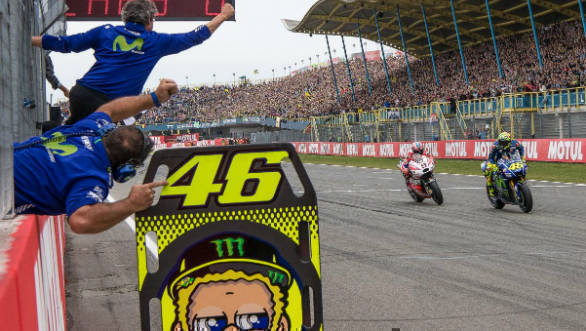 The lead trio began pulling away with each passing lap with Zarco managing to open a comfortable gap, taking full advantage of his soft tyres.

Rossi meanwhile began hunting down arch nemesis, Marquez and at the opportune moment ,managed to pass the Spaniard for second. Next on the Doctor's list was Zarco who was just about managing to hold on to the lead. And then Rossi attacked, managing to get past the Frenchman in similar fashion as Marquez.

Rossi was now in the lead and looked quite comfortable, and then it began to rain. The riders were allowed to switch bikes, shod with wet weather tyres and Zarco was one of them. 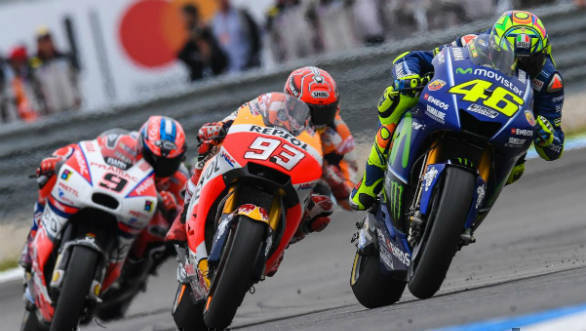 The front runners though were going for it with Andrea Dovizioso joining the party. Rossi at one point was under immense pressure from Pramac Ducati rider Danilo Petrucci, who seems to be on a roll this year.

With about 5 laps to go, Petrucci overtook Rossi for P1 and held the lead for a bit, but the determined Rossi managed to claw his way back to the top spot, recording his 115th win. Petrucci was a close second, six hundredths of a second behind Rossi.

The battle for third, meanwhile was down to the wire, with Marquez, Dovizioso and Crutchlow engaged in an epic battle. In the end, Marquez just about managed to keep his front wheel ahead of the duo to snatch P3. 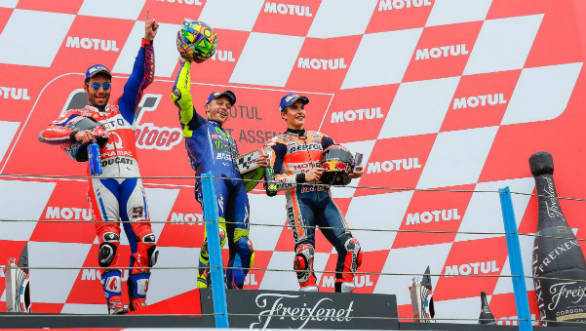 Rossi's Yamaha Movistar team mate Maverick Vinales suffered a crash at the chicane before the start finish straight, the front end of his M1 wiping out. Andrea Dovizioso, who was right behind him did a brilliant job of keeping his bike from hitting Vinales. 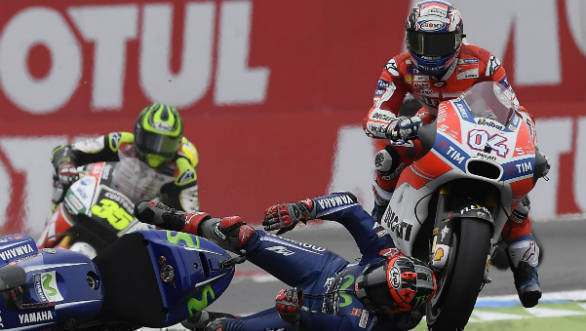