The first leg of the 2017 Afriquia Merzouga Rally came to an end yesterday after a total of 84km. The comparatively short leg had just competitive sections measuring just 41 km and a 2km Prologue stage. This year, Sherco TVS Racing has four riders competing in the Merzouga Rally  Joan Pedrero Garcia, Adrien Metge , Aravind KP and Adbul Wahid Tanveer, who won the India Baja Dakar Challenge. Garcia completed Leg 1 in seventh position with a time of 32m52s, while his team-mate, Metge, finished eighth with 33m13s. Aravind stood at 20th after Day 1 while Tanveer was 84th. 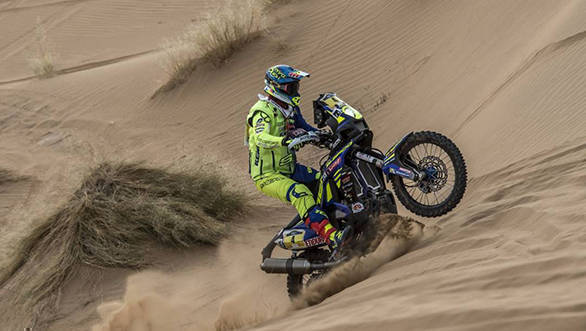 Leg 2 of the Merzouga Rally is currently underway and comprises of 188km of competitive sections and 53km of transport. It will be more challenging than Day 1 as riders will have to ride across more sand, dunes and riverbeds.