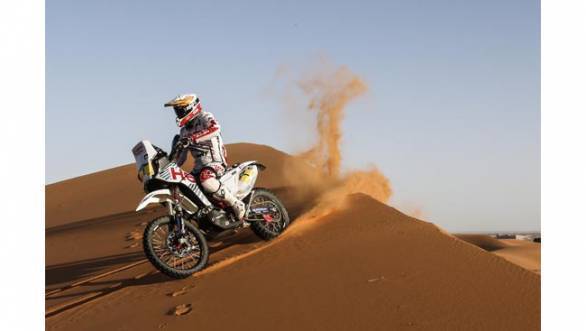 The sixth stage of the 2017 Merzouga Rally involved a 50km dash to the finish line, Motocross style, which essentially meant that the riders all set off together. It would prove to play into the hands of Hero MotoSports Team Rally's Joaquim Rodrigues, who, with his vast Motocross experience, managed to end the stage in second position. Santosh took 24th position in the stage.

This meant that at the end of the 1200km of riding over the course of one prologue and six special stages, both Hero MotoSports Team Rally riders had finished strongly.

Joaquim 'JRod' Rodrigues took ninth overall in the standings, which, given that he'd entered the top 10, wasn't a bad place to end the rally for the Portuguese rider. Meanwhile, India's very own Chunchunguppe Shivashankar Santosh, CS Santosh that is, finished the rally in 17th position overall. It was a good way to end the event, and get past the injury sustained in the Desert Storm earlier this year.

Perhaps the hardest part of the rally for JRod was, when on the third stage of the rally, his motorcycle suffered damage to the cooling system, the repairs to which cost him time. Later on that very same stage JRod got stuck in a sandstorm, which meant that he lost a lot of time once again. But he overcame the ordeal and still managed to end in a strong position. Said Rodrigues of the rally, "It was a good last stage for me, arriving second. There was a big battle happening in the dunes which was a lot of fun. I pushed hard and made it to the lead but I lost time due to two crashes. Very happy for a good result for the Team. It was a good rally for us and now we focus on the next rallies to come." 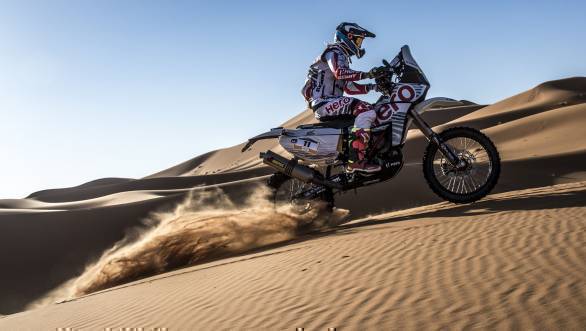 Meanwhile, Santosh managed to make it into the top 20, which was rather tough given the fact that he had to deal with the spinal injury that he'd sustained earlier in the year. It was something that he was clearly pleased about, saying, "What a great end to a fantastic 6 days of racing here in Morocco. It has been a year since my journey with Hero began and I have definitely made a lot of progress from the way I rode last year to this year. I came here with the target to gain experience and finish the Rally with a decent result. I'm happy to have achieved both. Overall, an exciting and purposeful Rally for the whole team."

Needless to say Wolfgang "Waffy" Fischer, the team manager of Hero MotoSports Team Rally was happy too. "Another 100% finish for the team with both the riders arriving at the finish line. We couldn't ask for more as it was a really good race. We overcame the challenges and our struggles and finished the race. And that's what matters. Just as last year, Merzouga is proving to be a good training and testing ground for the bikes and the riders. This year was more difficult than before in terms of navigation and to have a complete race like that is very useful for the riders. Congratulations to the whole team and greetings to India. "