The third stage of the 2017 Merzouga Rally was divided into two parts. The first ran over 112km, and the second, after CP1, ran over 63km. The day proved to be challenging for the two Hero MotoSports Team Rally riders. On the one hand there was the sandstorm that lasted half an hour on the second half of the stage. For Joaquim "JRod" Rodrigues, though, there were other issues as well. 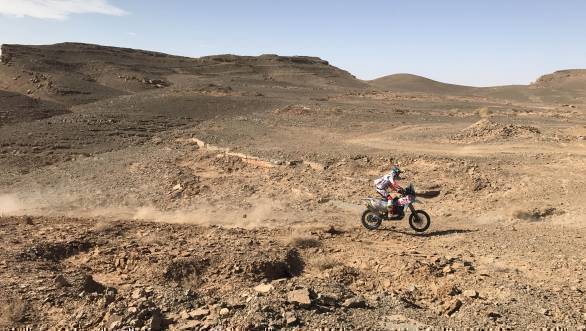 While JRod started the stage well, he hit trouble when a puncture to the bike's cooling system caused worries. JRod stopped to fix the leak, which lost him time. The fact that he had to stop in the middle of his run when the sandstorm came and wreaked havoc across the stage, meant that he only could cross the finish line long after the other competitors had already gone by. This meant that JRod finished the stage in 23rd position. In the provisional overall standings, the Portuguese rider is currently 16th, one spot behind his Indian team-mate.

"I was feeling really good at the start of the stage and tried to catch the guys in front of me. But then my bike started losing water because of a puncture in the cooling system. I managed to finish the 1st loop somehow. The team fixed the issue and I started the 2nd loop well only to get caught in a big sand storm," he said. The fact that visibility was so poor meant that JRod drove really slowly to bring the bike back safely. "I had to stop in the beginning as I couldn't see anything but then I started again, driving at a very slow speed of 5km/hr to bring the bike home safely. It was really hard to navigate in the storm but in the end I am happy to be back safely," he continued. 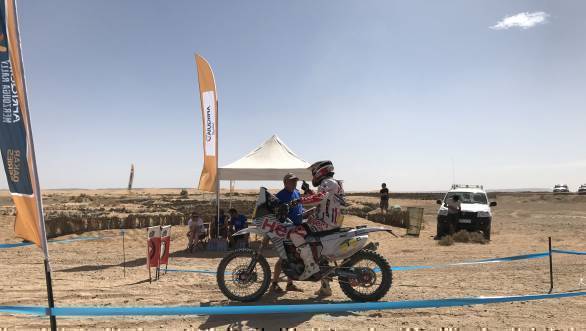 JRod waits to begin the second loop of Stage 3 of the Merzouga Rally, after the issues with his bike's cooling system were sorted out

The stage wasn't entirely easy for CS Santosh either. An issue with his roadbook equipment meant that he had a delay in finishing the first loop. But things went much better in the second loop, with Santosh managing to tackle the initial small dunes rather easily. Of course, when the storm hit Santosh was caught in the middle of it, with just a few kilometres left to the stage finish. This meant that he ended the stage in 17th position. Overall, Santosh is currently 15th after three stages.

"Today was going to be a relatively short day with just 2 stages and a lot of navigation. I started the stage really well and I was able to catch the rider in front but then a malfunction happened in the remote that controls the road book and the echo to the odometer. It was a bad first part of the stage for me. The team fixed the issue at the stage break and the 2nd loop was good for me until I got caught in the storm for the last 4 km or so. Overall I rode well today but lost some time. I am now looking forward to the marathon stage," said Santosh.