Mercedes-Maybach GLS 600 SUV unveiled: Everything that you should know

German automobile brand Mercedes-Benz has pulled the wraps off its most luxurious offering, the Mercedes-Maybach GLS 600 SUV at the 2019 Guangzhou Motor Show. As the name suggests, this will be the uber luxurious flagship model that will lock horns with the Rolls-Royce Cullinan, Bentley Bentayga and also the Range Rover SVAutobiography. This is the third iteration of the GLS, after the regular model and the GLS 63 S that debuted at the 2019 Los Angeles Auto Show. Back in 2018, Mercedes had showcased the Vision Mercedes-Maybach Ultimate Luxury concept which made many expect a Maybach SUV from Mercedes. 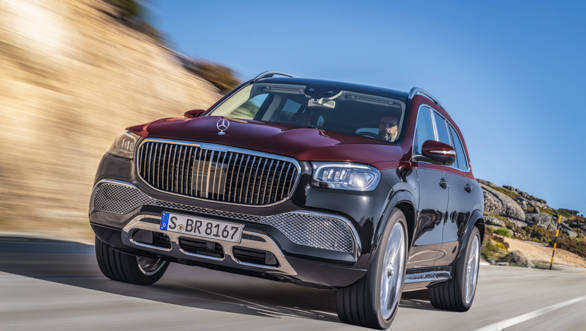 But why a Macbach SUV?

Cause Mercedes can! Four years ago, the car marque launched the Mercedes-Maybach S-Class. Till date the company has sold over 45,000 units which also translates to one in every seven S-Class is a Maybach, speaking of its popularity among the connoisseurs of luxury. Going by the global trends, SUV has emerged as a strong segment. According to JATO, with 29.77 million units sold, SUV held the top position among all segments in 2018 wherein volume grew by 6.8 per cent, or almost 1.9 million unit. Also, China, USA and Europe have been the top three markets for SUVs globally. Therefore, we believe China was chosen as the preferred location for the unveiling of the 2021 Mercedes-Maybach GLS 600 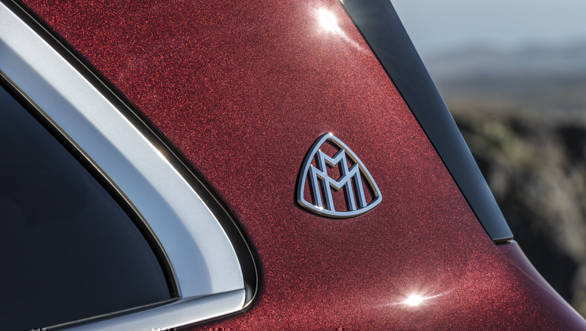 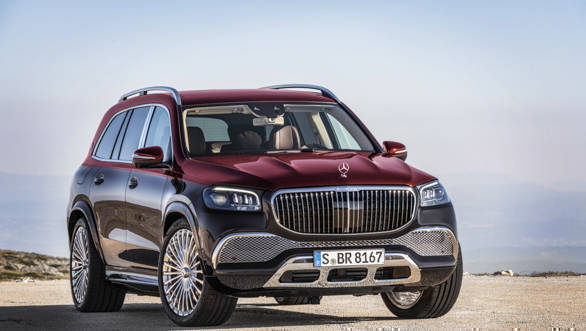 The Mercedes-Maybach GLS 600's design takes close inspiration from the Vision Mercedes-Maybach Ultimate Luxury concept.  The front is as imposing as it can get with a really large aluminum-finished grille paired with sleek LED lights. The bumper looks rather simple with large air scoops - that was the concept. The production ready model too gets the iconic grille with vertical pin stripes and its sheer size and dimension gives the Mercedes-Maybach GLS 600 the much impressive imposing stance. The front also gets a generous chrome treatment on the bumper and also on the bash plate underneath the front bumper. 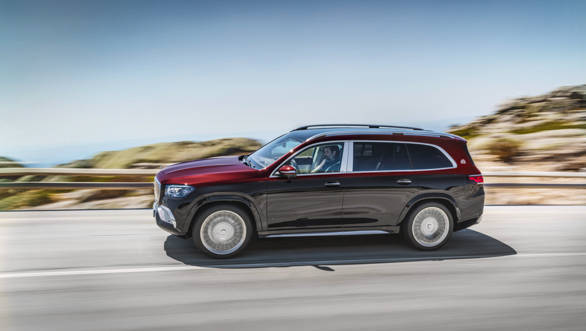 The overall silhouette does look reminiscent of the new-gen Mercedes-Benz GLS SUV. However, there are details that makes the Mercedes-Maybach GLS 600 look distinct and also more special. For starters, it gets 23-inch Maybach specific wheels with Pirelli PZero 285/40 R23 tyres, the spokes of which carry the pin stripe design as seen on the grille. The chrome theme continues on the side but in a subtle way on the doors and also around the windows. The highlight of the side has to be the way the side step that is neatly tucked in slide out. Even the side step design features the pin stripes. The other details include the chrome metallic finish on the B-pillar and also the large Maybach logo. The rear profile of this massive SUV too get dollops of chrome on the deflectors and also the tail gate. Making this Mercedes-Maybach SUV special is the two-tone paint scheme that is specific to the Maybach and is finished in metallic chrome. 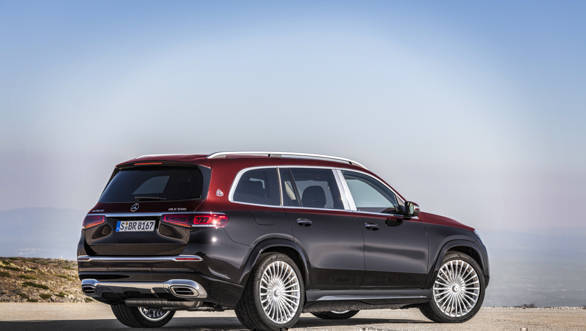 If it is a Maybach, cabin comfort and luxury are of prime importance. The cabin is mostly done in nappa leather and looks way more distinct and special when compared with the regular GLS SUV. As seen in the images, Maybach detailing and logos have been placed tastefully on the door sills, steering wheel and even on the pedals. The leather upholstery has been complimented with faux wood that is seen on the dashboard and also on the controller for the infotainment screen. 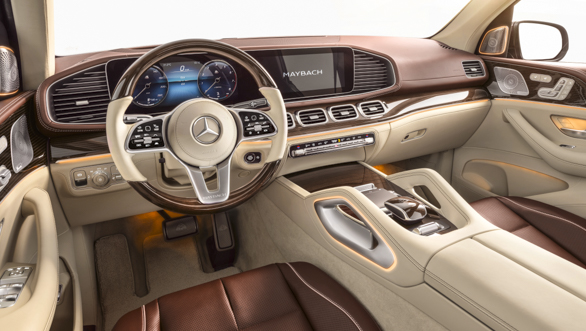 Mercedes-Maybach will offer tons of customization and personalization options where you can choose the precise color and also the finish on it to make the cabin suit your individual taste.  The rear occupants space gets pulled back seats with an optional captain seat arrangement with a fixed central console, similar to that in the S-Class. The rear occupants also get a touchscreen unit to operate the MBUX. 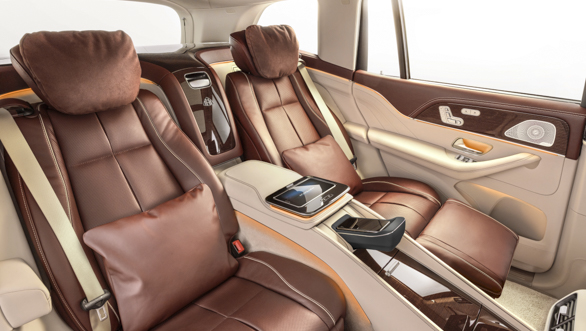 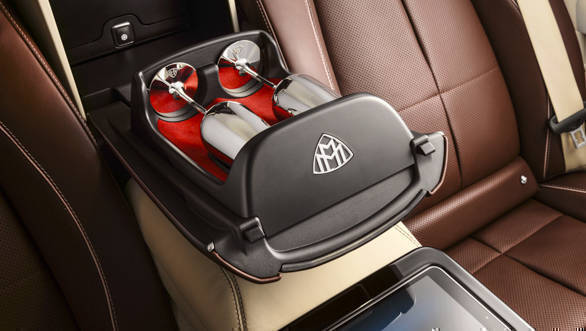 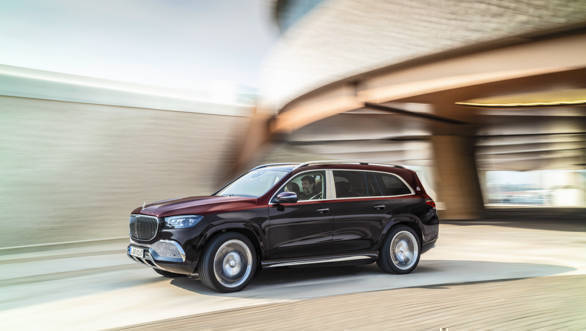 The engine is combined with the 48-volt system EQ Boost that offers a temporary boost of 21PS and 250Nm.  During deceleration, the kinetic energy from the starter-generator is converted into electric power. As claimed, the SUV can touch 100kmph in 4.8s and has an electronically limited maximum speed of 250kmph. The Mercedes-Maybach GLS 600 comes with drive modes such as sport, comfort and individual that are also seen other Mercs. However, this one also gets the Maybach mode which essentially focuses on the comfort of the rear occupants. This is done by making the SUV start in second gear without start/stop, reduced number of gearshifts and also tweaks the suspension settings. 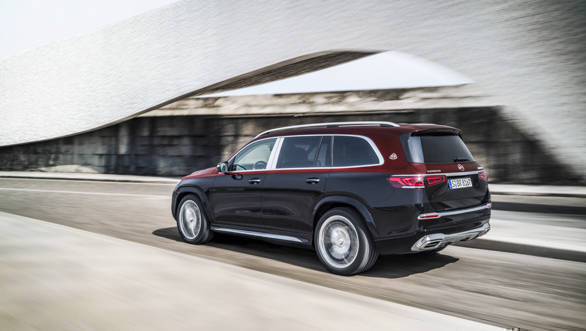 The deliveries of the Mercedes-Maybach GLS 600 will commence from the second half of 2020, as confirmed by the company. While the prices have not been announced yet, it is being speculated to be at an equivalent of Rs 1.50 crore in the international markets. We believe the GLS 600 will be launched in the top three markets before making its way into India which could happen in late 2020 or early 2021. 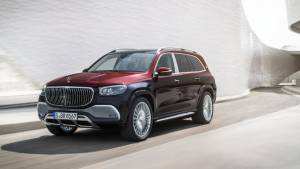