Mercedes-Benz is all set to reveal its brand new pick-up truck on October 25, 2016. It may be called the GLT-Class but that's just speculation for now. The German luxury car maker has partnered with the Renault-Nissan alliance to develop the pick-up. The Mercedes-Benz GLT will use the same platform that underpins the Nissan Navara and Renault Alaskan. Mercedes-Benz is expected to offer four and six-cylinder engines, in both petrol and diesel options. A six-speed manual transmission is standard while a 7-speed automatic will be offered as an option. 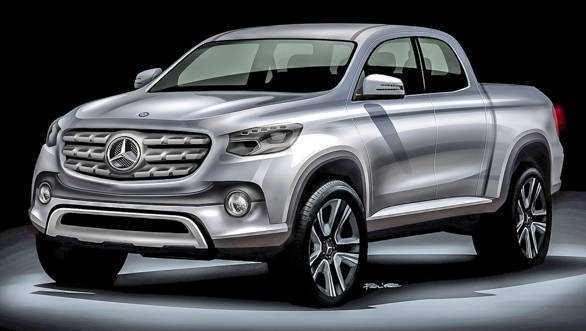 The body style will be highly functional, says Mercedes, with a four-door, twin-cab layout. The GLT will also get independent rear suspension and 4MATIC all-wheel drive.

The three pointed star logo on the grille will also mean that the pick-up may come with class leading features, build and quality. Mercedes-Benz also says that the GLT will feature excellent vehicle dynamics and contemporary connectivity and infotainment systems. 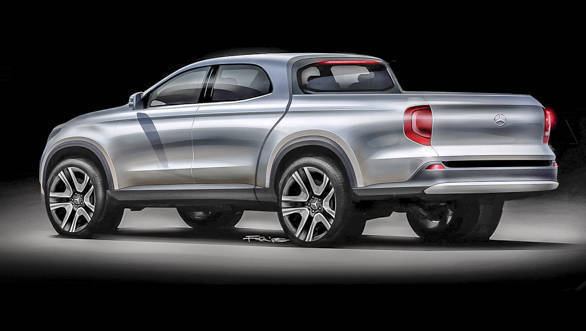 The list of safety features should also be at par with Mercedes-Benz SUVs. The premium product is expected to compete with the likes of the Toyota Hilux, Ford Ranger and the Volkswagen Amarok. Pick-up trucks are becoming increasingly popular owing to their rugged build and utility. Also, they are no longer built as utilitarian products. This means they feature the same kind of build and equipment that is seen on SUVs, thereby increasing their appeal.

The pick-up truck segment in India is currently in a nascent stage when you consider international markets. However, things are changing ever since the Isuzu D-max V-Cross entered the market. Its abilities are proven and the killer pricing has seen its popularity soar. While there are a pick-ups like the Mahindra Imperio and Tata Xenon that are on sale in India, they are mainly used for commercial applications. The D-Max V-Cross, on the other hand has carved a little niche for itself as a lifestyle Pick-up. Tata in fact, was recently caught testing the new Xenon pick-up truck. Will the Pick-up wars ignite in India? Watch this place to find out.