Mercedes will be bringing the SLS AMG GT Final Edition to the upcoming LA Motor Show. For now the company has released images of this gull-winged sports car. As the name suggests, it is the 'final edition' of the fabled AMG car. Merc will manufacture a limited batch of 350 cars before it retires the vehicle next year and brings in a new one. There is also a word going about that the replacement car, codenamed C190, will come with a new 'SLC' moniker. No sufficient details about the car have emerged. Mechanically, the car remains the same as the SLS AMG. It draws power from a 6.2-litre V8 engine that delivers 591PS of max power and 650Nm of peak torque. Power is driven to the wheels via a 7-speed dual clutch tranny. The car gets a carbonfibre hood and front splitter, redesigned alloys, a new front bumper and new ceramic brakes. The rear wing and the carbonfibre mirror housing are also updated. 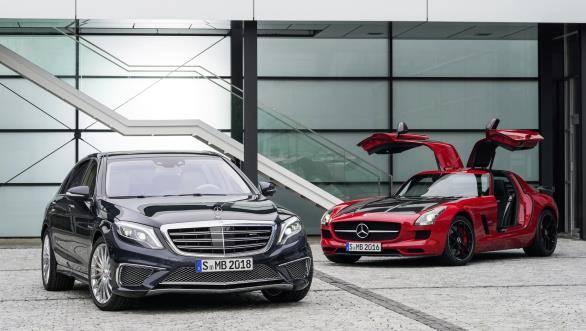 The SLS Final Edition draws power from a 6.2-litre V8 engine that delivers 591PS of max power and 650Nm of peak torque.

It will also make a simultaneous debut at the Tokyo Motor Show. Sharing the stage, as we already informed you, will be the new S63 AMG. The V12 has been making a lot of noise ever since Merc spoke about it recently.

"Thanks to the wide variety of models  from a gullwing model to the roadster, GT, the Black Series, an electric drive and its success in motorsport as the GT3 variant  the SLS AMG has become ever more attractive and is now one of the legendary dream cars from the brand with the star," said Mercedes.

The SLS AMG first rolled onto the roads in 2009.