The Mercedes-AMG GT Black Series is now the fastest production car to lap the 20.88 km long Nurburgring Nordschliefe. The AMG flagship completed the full lap in 6m 48.047s and the truncated 20.6 km lap without the T13 straight in 6m 43.616s. With the second timing being the standard until 2019, the GT Black Series has beaten the previous record held by the Lamborghini Aventador SVJ by 1.354s. The GT Black Series was driven by GT3 racer Maro Engel and the run was officially vetted for authenticity.

The GT Black Series used for the run was fitted with Michelin Pilot Sport Cup 2 R MO tyres. These have been specially developed for the car and fitted as standard. For the run, Mercedes-AMG set up the GT Black Series' heavily adjustable aero package specifically for the Nordschleife. The carbon-fibre front splitter was set to its most aggressive Race setting while both blades of the two-part rear spoiler were set to their middle position. To improve the effectiveness of the front splitter, the adjustable coil-over suspension was lowered by 5mm at the front and 3mm at the rear. The Black Series' camber was set to its highest values of negative 3.8 degrees at the front and negative 3.0 degree for the rear wheels. Finally, the anti-roll bar was at the stiffest of its three settings and the nine-step traction control system used in mode 7 or 8 as required. 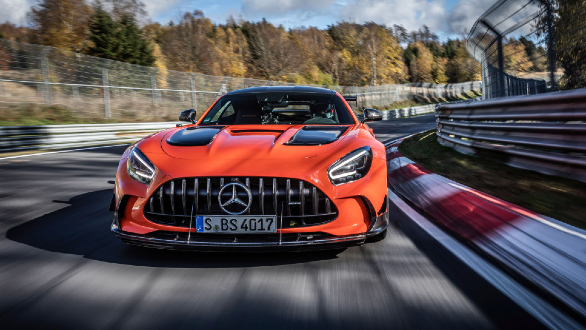 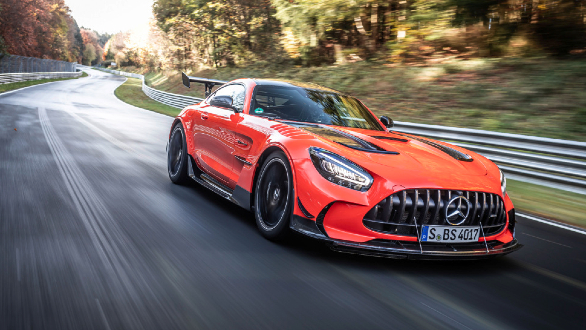 The Mercedes-AMG GT Black Series is the latest car from a line that began in 2006, signifying the most hardcore of AMG's cars and following the SLS Black Series from 2013. 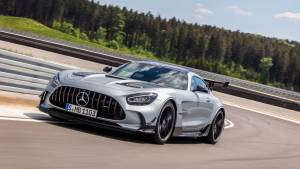