American electric motorcycle company Lightning has unveiled its LS-218 superbike which has an unusual model number. The bike, tested at the Bonneville Salt Flats in 2012, achieved a top speed of 218mph (348kmph) and thus, proved true to its name. The LS-218 also is the 2013 Pikes Peak Champion taking victory with a time of 10 minutes 0.694 seconds and the FIM EPower championship, setting this bike up to not be just the fastest electric motorcycle, but also the fastest production bike in the world! 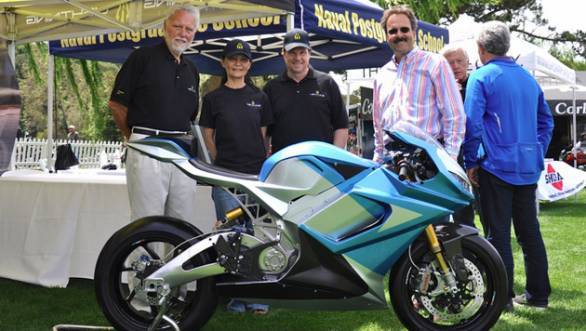 The bike at the unveiling at the Quail Motorcycle Gathering

The bike was unveiled at the Quail Motorcycle Gathering in California and the finished product is what the company had promised, ahead of the official launch later this summer. The bike has a 200+PS liquid cooled direct drive electric motor which has a mind-bending 227Nm of torque right from the word go! The LS-218 has three battery options offering 380V, 12kwh for 160 to 200kmph; 15kwh for 200 to 240kmph and 20kwh  for 260 to 290kmph. The added weight of the battery poses for a heavy bike that weighs 225kg.

Richard Hatfield, CEO of Lightning Motorcycle said, "Lightning's research and development team has developed electric vehicle technology through years of competition at racing events around the world. We believe that the LS-218 offers consumers the best of design, performance and value in today's market."

The bike will most likely cost around $38,000 (approx Rs 22,32,880 without taxes and duties). In addition to the performance, Lightning provides customers unprecedented options to personalize their Lightning LS-218. Some examples of available options are a fully programmable Android display, carbon fiber swing arm and frame, titanium fasteners, custom graphic wrap and seating.