Last month, McLaren Automotive had released teasers of its next offering. And now, the British supercar manufacturer has revealed all the details of it. The images that you see below are that of the 2019 McLaren 720S Spider convertible. McLaren has made specific changes to the 720S Coupe that was launched 18 months ago to transform it into a drop-top gorgeous supercar, the 720 Spider. These changes include frameless doors, updated spoiler programming and also other performance spec changes. McLaren Automotive has confirmed that deliveries of the 2019 720S Spider will commence from March 2019 onwards.  The UK prices start from £237,000 that amounts to approximately Rs 2.15 crore, excluding import duty and taxes. 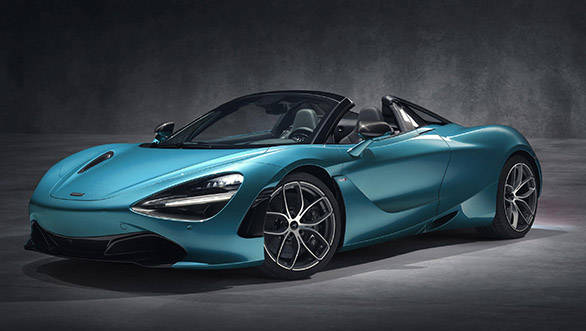 Like all McLaren cars, the new 720S Spider has a carbon fibre structure at its core, in this case designated Monocage II-S. The Monocage II-S is a development of the Coupe 's Monocage II, without the central spine running front to rear above the cabin. The rearmost section of the upper structure that is specific to the Spider, comes with retractable hard top; additionally, the header rail across the top of the windscreen has been revised, to integrate the central latching mechanism. McLaren mentions  that despite the removal of the fixed roof, there is no need for additional strengthening; even the unusually slim but incredibly strong windscreen A-pillars first seen on the 720S Coupe remain unchanged. To provide enhanced rollover protection for occupants, fixed carbon fibre structural supports are integrated into the rear of the Monocage II-S, additionally providing the main anchor points for the roof system and the seatbelts.  In the first-generation Super Series, steel supports featured and the switch to carbon fibre has contributed to the Rollover Protection Structure (ROPS) in the 720S Spider being 6.8kg lighter than in the 650S. 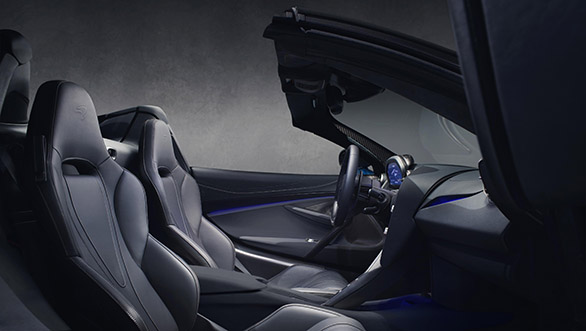 Overall, the new 720S Spider is just 49kg  or less than four per cent - heavier than the 720S Coupé. The increased weight is primarily associated with the RHT and tonneau system. With a lightest dry weight of 1,332kg, the 720S Spider is comfortably the lightest car in its competitive set, at 88kg less than the 1,420kg dry weight of its closest rival. The low weight is the foundation for the dynamic performance and efficiency benefits that McLaren is so adept at exploiting for the greater enjoyment of its customers. The canopy-like design of the 720S Coupé is recognised for the sense of 360-degree vision it provides, allowing light to flood into the cabin.

The retractable hard top (RHT) of the 720S Spider is a completely new design, with a one-piece, carbon fibre roof panel as standard. The folding mechanism for McLaren's new RHT is electrically rather than hydraulically driven and the system is the fastest-operating convertible roof in the supercar class, with the retractable hard top lowered or raised in just 11 seconds  six seconds quicker than the 650S Spider. It can be retracted at a speed of 50kmph. 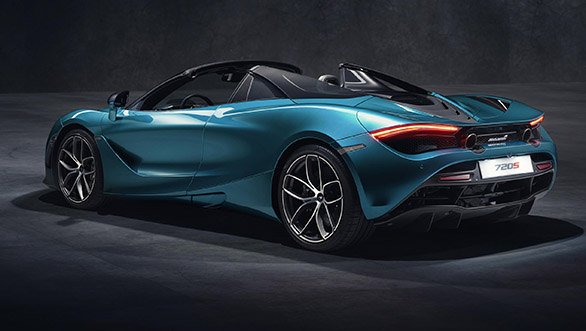 To accommodate the Retractable Hard Top, the Monocage II-S features a new carbon fibre upper structure engineered to sit as close as possible to the air charge coolers and for plenum intake. This maximises luggage space; there is 58 litres of stowage available under the tonneau cover with the roof raised. The tonneau cover also sits lower than that of a 650S Spider  again by 25mm  extending visibility by 7.5m in length. The 2019 McLaren 720S Spider can do a 0 to 100kmph sprint in 2.9 seconds and can further reach 200kmph in 7.9s. 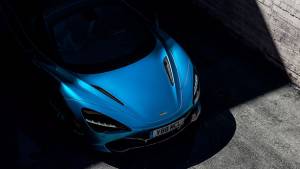