The fourth day of Dakshin Dare brought the participants to the outskirts of Hospet. The challenge for the day was divided into three stages, the first of which was the Countryside leg. True to its name, this one involved driving through 27 kilometres of scenic country along undulating terrain at whizzing speeds. The long, flat stretches allowed vehicles to reach the highest speeds recorded in this rally so far. Sandeep Sharma maintains his lead on day 4 too

The last two stages of this section were the Windmill leg, in which the vehicles ascended and descended hillsides and were subjected to a lot of off-road action. By the end of the day, the participants had travelled a total of 250 kilometres.

The Extreme Car category saw Team Maruti's Sandeep Sharma and Varun Davessar in their Maruti Gypsy maintain their lead, clocking a total time of 2:37:46. And again, the second place went to Sanjay Agarwal and Venu Ramesh Kumar from Team Maruti with a time of 2:38:14. Suresh Rana and Parminder Thakur finished third again, at 2:40:39. Natraj on his bike, swerves his way to the top on the fourth day too 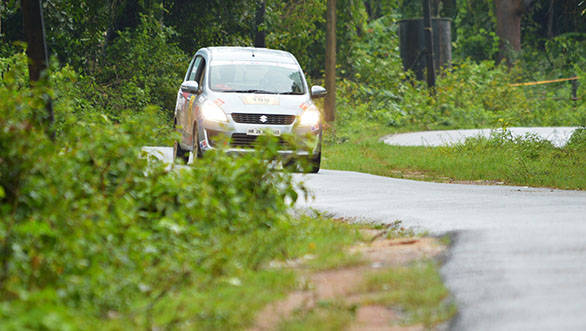 Mr Maruti of Team Maruti in his Maruti Ertiga, leading the way

For the fourth day in a row, Team Maruti drivers Karthick Maruti and Sankar Anand again denied others a chance to lead in the Endurance category with a total penalty time of just 1:59 as the vehicles traversed 200km around Hospet and back on day four. Grabbing the second spot, Sachin Singh and Prathima finished the day with a penalty time of 2:38. Again in third place were Ganesh Moorthy and T Nagarajan of Team Maruti finishing at 2:48.