India's largest utility vehicle manufacturer Mahindra and Mahindra would soon be offering petrol variants for most of its vehicle range.

Pawan Goenka, Mahindra's executive director, said, "Despite being a diesel player, we had a feeling that a diesel-only approach may not be good enough. Now, we will launch the Scorpio and XUV500 in petrol this year, and in future all our mainstream vehicles will have both options."

He further added that in the next two to three years, the company would roll out both petrol and diesel variants for all of its models and even look at the hybrid variants at later stages.

The Indian automaker began its petrol drive with the launch of its compact crossover the KUV100. It was powered by Mahindra's mFalcon family of petrol and diesel engines. The 1.2-litre mFalcon 3-cylinder engine has been developed in-house. The all-new engine is future protected to meet Bharat VI emission norms, if necessary. The G80 petrol engine displaces 1,198cc and produces a maximum power of 82PS at 5,500rpm, while 115Nm of torque is available between 3,500-3,600rpm.

Pawan Goenka believes that a lot of carmakers would be launching hybrid vehicles in the market after 2020, and Mahindra would surely be looking to participate in the hybrid segment. 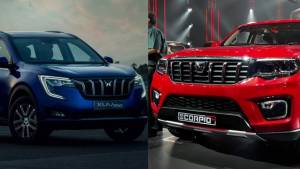