Mahindra to compete in the FIM CEV International Championship

Mahindra has been the only Indian manufacturer to compete in the Moto3 class of MotoGP over the last few years. They have also competed in the Italian National CIV Championship. Having tasted the podium in Moto3 as well as having clinched the Italian championship last year, their racing division is on a roll as they are now entering the FIM CEV International Championship this year with their MGP30, 250cc four-stroke machine. This is the same bike which is proving to be the most popular among teams in the 2014 Moto3 class with as many as eight entries on the grid (two factory and six privateer teams). 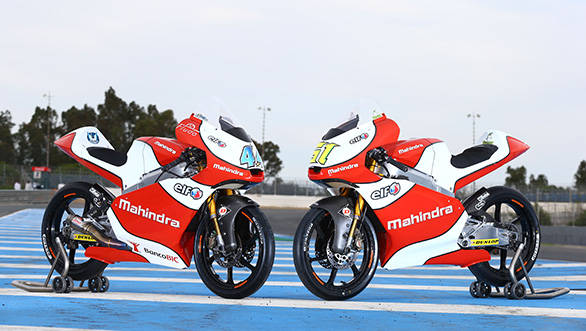 Mahindra Racing is fielding two of these Suter-developed motorcycles in the CEV Championship with the Spanish Mahindra TMR Competicion team. The series is Dorna-run, and is based in Spain and has become the main feeder series for new riders into Grand Prix motorcycle racing. The rider line-up is talented too and 17-year-old Spanish rider Albert Arenas (who will pilot one of the motorcycles) winning a race in the CEV Championship in 2013 and 15-year-old Italian Stefano Manzi (on the second motorcycle) winning a race in the Italian CIV Championship.

"It has been a very busy winter for us," says Mahindra Racing CEO Mufaddal Choonia. "The excellent performance of the MGP3O in the World Championship led to a lot of interest from customer teams and so it will be great to see eight Mahindra bikes on the grid in Qatar. Adding Mahindra TMR Competicion's CEV programme makes sense for us as it is a great opportunity to gain even more data from our bike that will feed into our development programme. It also enables us to assess the Moto3 stars of the future. We had great success with our Italian racing programme, winning the 2013 Constructors' and Riders' titles, and I hope that Mahindra TMR Competicion can replicate that in Spain."

Mahindra to compete in FIM Moto 3