Following tie-ups with Engines Engineering and Suter Racing over the past few years, Mahindra Racing had announced last year that they were transitioning from a factory Moto3 outfit to a supplier who would make available their MGP3O to customer teams. 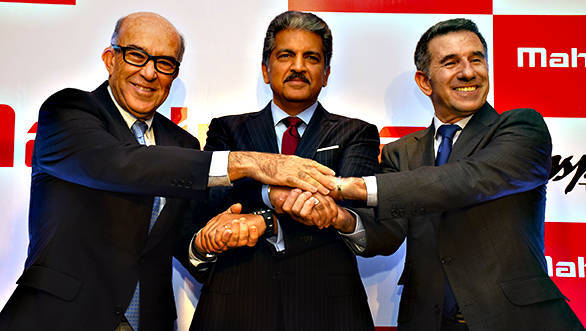 Of the four customer teams that Mahindra Racing will supply motorcycles to, the most notable and important will be Aspar. Mahindra says that joining forces with Aspar team owner, Jorge Martinez will prove to be highly fruitful, owing to Martinez's experience and credibility of winning multiple world championship titles, both as a rider as well as a team owner. Mahindra will field a total of four teams and nine MGP3O bikes on the grid for this season. Mahindra also announced the opening of its new technical development centre at Besozzo in Italy.

At the announcement, Anand Mahindra, chairman, Mahindra Group said, "We are still at a relatively early phase of our journey in motorsport, but the technological challenge and learning that we achieve through our racing programmes are of major importance to the whole group. The international footprint and high profile of MotoGP helps us build the Mahindra brand globally. We are also strengthening our technical skills with the opening of a new development centre in Italy. This becomes part of our neural network of innovation along with other R&D facilities in India, Korea and the US."

Aspar will be responsible for rider development and running the team, whereas Mahindra will concentrate on developing the bike and supporting customer teams, says Mahindra Racing. The MGP3O bike has been tested by Aspar after the 2014 season of MotoGP ended and will be tested again at the start of the 2015 season. Riders astride the motorcycle for Aspar will be Jorge Martinez, Juanfran Guevara and Francesco Bagnaia.

The event of the announcement was also attended by the CEO of Dorna Sports, Carmelo Ezpeleta, who said,"We have definitely seen a surge of interest in MotoGP from India since Mahindra joined the series in 2011. I have been very impressed by what I have seen so far from Mahindra. The Mahindra bike challenges at the front of Moto3 and many teams and riders have been interested in working with Mahindra. I think the changes put in place for 2015 should make Mahindra even more successful and that can only be good for MotoGP in India."