Mahindra Racing had its best finish of the season with Miguel Oliveira's third place finish at the Dutch TT. Miguel put in a tremendous effort, starting 13th on the grid and fighting his way up. Oliveira soon found himself just 2.5 seconds behind second placed rider Alex Rins who was riding a Honda. Oliveira steadily shaved off the micro seconds before he was right on his Spanish rival's tail by the 16th lap. Oliveira then dived for the pass and made it stick. For the entirety of the race, the spectators at Assen were treated to an amazing spectacle of wheel to wheel racing with Rins never letting the Mahindra out of his sight. Finally, on the last lap, Rins outbraked Miguel at the final chicane, relegating the Mahindra rider to third spot on the podium.

Oliveira's team mate Arthur Sissis sadly couldn't put up a similar performance and finished the race at the 21st position. At the end of the race, Oliveira said, "It was a hard race. I was quite lucky at the start not to lose much time overtaking or getting involved in accidents. After that I focused on my lap time  I already knew that on used tyres we could make a good rhythm. Being so constant gave me an advantage. After I passed Alex Rins for second, he was behind me for quite a long time, and he studied me very well  so he was able to pass me on the last braking point. There are still areas we need to improve our bike and the team is working very hard. This result gives much more motivation to keep working, to improve the bike and be constantly on the podium or winning races." 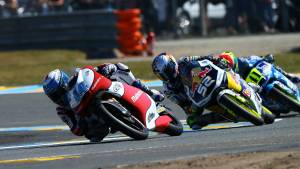 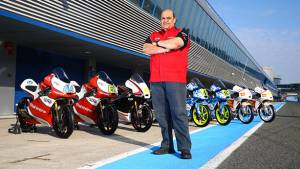 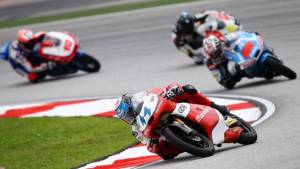