Mahindra had a successful 2013 season in the Moto3 Championship which saw the team regularly finishing in top 10 and eventually grabbing a third place finish in Malayasia at the hands of Miguel Oliveira. This splendid result has resulted in Mahindra having eight full time riders in this year's championship.

Along with its factory team line-up of Miguel Oliveira and Arthur Sissis, the Indian constructor will support Ambrogio Racing (Brad Binder, Jules Danilo), CIP Moto3 (Bryan Schouten, Alessandro Tonucci) and San Carlo Team Italia (Andrea Locatelli, Matteo Ferrari) with identical MGP3O bikes. This will ensure that all eight riders will have the opportunity to fight at the front during the course of the season. It may be that Mahindra has partnered with Suter Racing Technology in 2013 to develop these bikes. 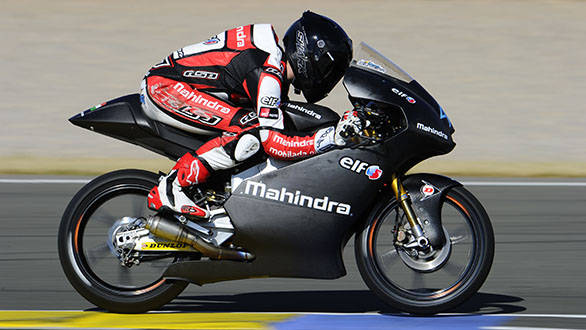 Miguel Oliviera on the Mahindra MGP30

Mahindra Racing technical director Davide Borghesi said, "The bikes are identical to the factory machines, and we have two track support staff at each race to work closely with the three customer teams. It is an impressive achievement for such a young constructor as Mahindra to be fielding the second highest number of bikes on the grid".

During the final pre-season test at Jerez with Oliveira, the team could manage only tenth place which was 0.353s from the fastest lap by KTM's Jack Miller. Later on the Portugese rider said, "It's been a good test, We had a good base from last year and from the previous tests so no big changes to the bike, just small adjustments on the engine braking, clutch and other settings. Overall I am happy with all of the work this winter."

Mahindra Racing CEO Mufaddal Choonia said, "This test isn't about positions, but about fine tuning and developing our strategies for mapping and set up, not only for our Mahindra Racing bikes but also with our new customer teams. Testing has been positive.

Behind Oliveira, Binder was the next best Mahindra in 16th place (+0.726s), with Sissis and Tonucci within 1.2s off the top.