Mahindra Racing took their M2Electro electric racing car and the MGP30 motorcycle for a spin at the Buddh International Circuit recently after they showcased them at the 2016 Auto Expo. The M2Electro, which was developed by Mahindra with manufacturers like McLaren and Hewland, will compete in the 2016 Formula E championship. According to Mahindra, the M2Electro will go from 0-100kmph in under three seconds. The company also says that the technology used in their race car, will soon be used "in your next electric car." Mahindra Racing has stated that the M2Electro has successfully completed pre-season testing and has covered over 2,000km on track. 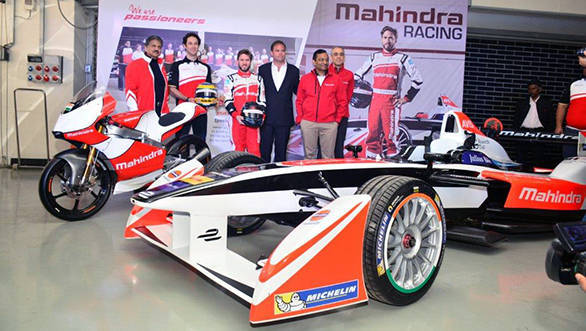 In the 2016 Formula E season, the M2Electros will be driven by Bruno Senna and Nick Heidfeld. Each driver will race two electric cars in one race. The driver pulls into the garage during a mandatory pit stop around the halfway point and swaps cars within a specified time.

The 2016 MGP30 motorcycle features a new engine and gearbox with a double exhaust system developed by Arrow, an improved chassis and better aerodynamics. The MGP30 will be raced by four teams comprising of two riders each, in the Moto3 championship  Team Aspar, Team CIP, the Outox Reset Drink Team, and MTA Team Italia. Mahindra Racing also stated in their release that Peugeot Motocycles' factory team, SP Racing, will be racing MGP3O-derived motorcycles.