Karun Chandhok and Bruno Senna have been confirmed as the two drivers who will pilot Mahindra Racing's Formula E cars in the inaugural Formula E championship that starts later this year. The announcement comes as no surprise, with rumours linking Chandhok to the outfit having surfaced soon after the team confirmed its participation in the series. Chandhok and Senna will partner each other for the third time in their careers, having driven for the same team in the GP2 Series and subsequently Formula 1. 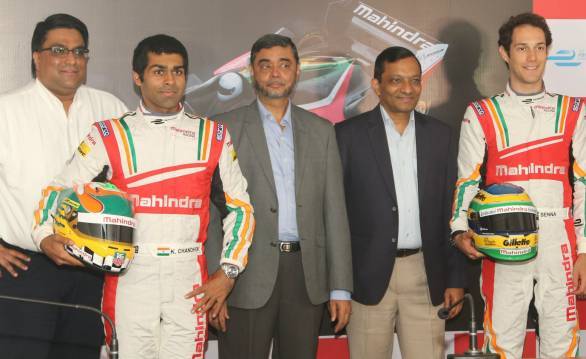 While Mahindra had unveiled their Formula E car at the Auto Expo earlier this year, the red and white livery initially seen has now been replaced with some black along with the tricolour incorporated into it too. And as Indian as the Mahindra Racing team might be, headed by Team Principal Dilbagh Gill, the running of the team will be left to highly experienced Carlin Motorsport. It's a similar strategy that Mahindra Racing uses even in the operations of their Moto3 team, with Suter Racing handling the racing aspect of the team.

And while Chandhok and Senna are known quantities, having established themselves as fairly accomplished single seater racers, Dilbagh Gill, Team Principal of Mahindra Racing Formula E is a motorsport enthusiast with some experience racing in India back in the day, alongside the likes of Vicky Chandhok, he admitted. Gill says his area of expertise is running large events, something he has done in the past with Mahindra - having formerly served as Mahindra Satyam's Head of Sport & FIFA Relationship.

A question that people have been asking repeatedly, though, is why Mahindra is heading the Formula E way? The obvious answer lies in the fact that Mahindra REVA builds and sells electric cars, something that they want to showcase as the only manufacturer of e-vehicles on the grid. "We want to change the perception people have of electric cars by going racing," declared SP Shukla, Chairman, Mahindra Racing. Meanwhile, Chetan Maini, founder and CEO of Mahindra REVA said that the trickle down effect that will be seen will work both ways "Mahindra Racing technology can be applied to our road cars, and the data we have accrued having tested over 5000 electric cars over several kilometres can be applied to our racing programme as well."

Back to the drivers, then. "We hate losing to each other, so we'll push each other hard," said Chandhok of his partnership with Senna. While Senna declared that teaming with Mahindra Racing, especially given their association with Carlin Motorsport, was something he was particularly thrilled about. "There will be a lot to learn very quickly, both for the teams and drivers, in terms of technology and driving styles and for race fans as Formula E will popularise a new type of motorsport across the world. Of course, I already have a great relationship with Karun which will help us work together and move the team forward very quickly," said Senna.

The 2014 Formula E season kicks off on September 14 in Beijing.