Mahindra Racing's performance at the 2014 French MotoGP held last weekend held at the Bugatti Circuit in Le Mans left something to be desired. That being said, four of their bikes (factory and privately entered MGP30s) placed in the top 20 positions. Factory rider Miguel Oliveira rode a dogged race to finish 12th, while team-mate Arthur Sissis placed 17th, missing out on points by two places. The pair were joined by customer team riders Brad Binder who finished 14th and Bryan Schouten who finished 19th. 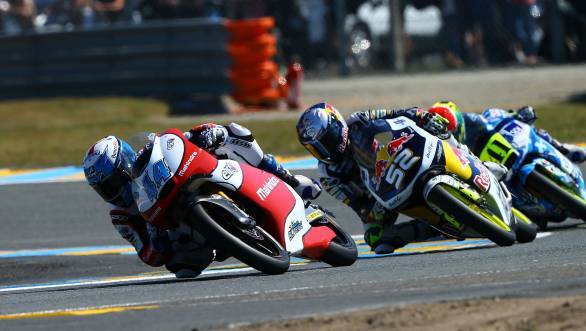 Miguel Oliveira holding off challengers at the Bugatti Circuit

Oliveira's finishing position adds another four points to his championship standings, bringing his total points tally up to 20. The first round in Qatar at the Losail circuit was his big points haul, where he claimed fourth place. Oliveira has finished in the points in every single race since, apart from the one race where pre-race problems meant he couldn't start. After the race in Spain, the test session helped Mahindra iron-out a lot of their issues, but the race at Le mans was hard fought. Australian Jack Miller of KTM took race victory to increase his overall lead in the championship standings.

"The race was quite hard. We know we have a lot of work to do. The bike has some strong points, but there are some other things that are really difficult to solve. We have improved so much since last year, but also the other factories have made a big step. So we have to keep pushing to develop new things, and get closer to our goal," said Miguel Oliveira after the race. 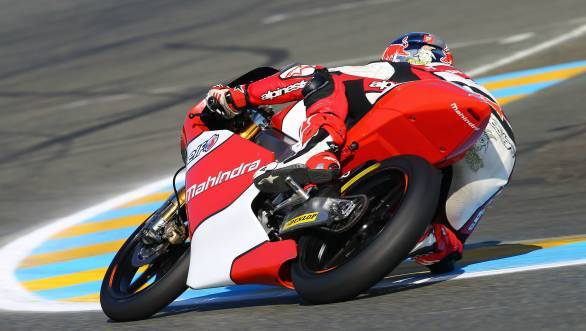 Arthur Sissis in action at the French Grand Prix

The next round is the Italian Grand Prix in two weeks and the Mahindra squad will be focused on refining the speed and overall performance of the machine for one of the fastest tracks of the year - Mugello.

Mufaddal Choonia, Team Principal of Mahindra Racing had this to say about his team's performance, "It is the first time we've had four Mahindras in the top 20, but of course we need to get much better positions. We have identified a few areas to work on in the next ten days before the Mugello race, and we will be doing that. It's good to see the pace of our customer teams improve, and we hope the entire Mahindra family can benefit as we continue development of the MGP30".