If there ever was a race that held true to motorsport's "it isn't over till it's over" caveat, it was the inaugural FIA Formula E race at Beijing. Dubbed an e-prix and not a grand prix, as the cars competing in the series are all-electric single-seaters, the series was something that many motorsport fans initially viewed with levels of skepticism. However, most were pleasantly surprised. Why? Because it turned into something of a nail-biter! While Nicolas Prost, of the E-Dams team looked all set to win the first ever race at Beijing, with Nick Heidfeld chasing him down all the way to the chequered flag, things really didn't turn out like that. Let's talk you through the race. 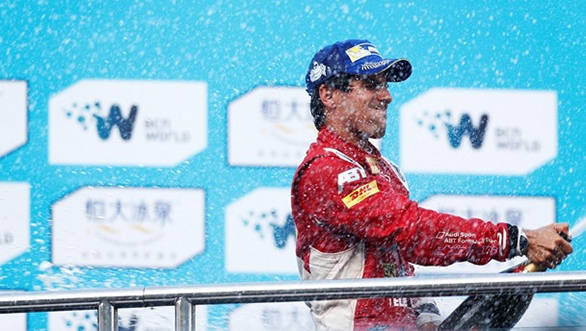 It was Nico Prost who was on pole position for the first ever Formula E race, and the Frenchman led all through, except during the brief pitstop period when he relinquished his lead to Sam Bird. However, as Bird was on a different strategy, the fact that he moved into the race lead mattered very little. After all, as soon as he pitted to swap his car (yes, since it's Formula E, they swap cars and don't refuel) Nico took back the race lead. His father Alain Prost, four-time Formula 1 world champion and team boss of E-Dams looked on. It seemed like it was a given. Nico would win the race. 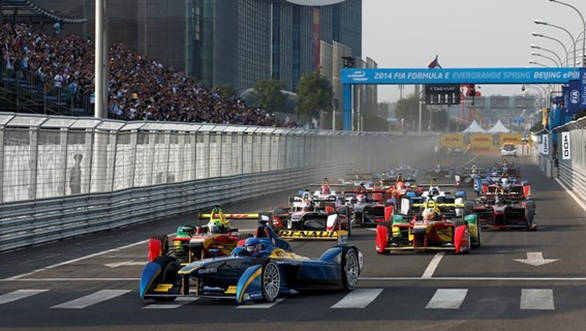 Nico Prost leads the pack at the start of the race

But there was one minor detail they'd forgotten about. Unlike other forms of motorsport where the cars get lighter as the race wears on, while the power remains constant, things are different in Formula E. Here, the weight remains constant, but the power decreases. So winning a race does, to a large extent, boil down to who manages to conserve and utilise his car's power the most efficiently. One of the drivers who had this spot on was Nico Prost, of course. So too, did Nick Heidfeld, who had been reeling him in steadily over the course of the 25 laps e-prix. And so on the very last lap of the race, with one corner separating the drivers from the chequered flag, Quick Nick pulled his Venturi alongside the E-Dams car. Prost, eager to prevent Nick from getting past him, moved to the inside and collided with Heidfeld. This sent Heidfeld's car careening through the air, eventually landing upside down. It was an accident that looked scary, but thankfully Heidfeld escaped unharmed, scrambling out of the car on his own. Prost's car had a broken suspension, which meant he wasn't able take the final corner and win the race that had seemed to be in the bag.

And while the two racers stood fuming (Heidfeld ran across the track to exchange a few heated words with the Frenchman) it was Audi Sport Abt's Lucas di Grassi who took the win, ahead of Franck Montagny and the second Abt car of Daniel Abt. di Grassi would later admit that no driver wanted to win a race in such circumstances, however he was still pleased to have the win under his belt. While Daniel Abt would receive a penalty for consuming too much battery power, Sam Bird would be promoted to third place. 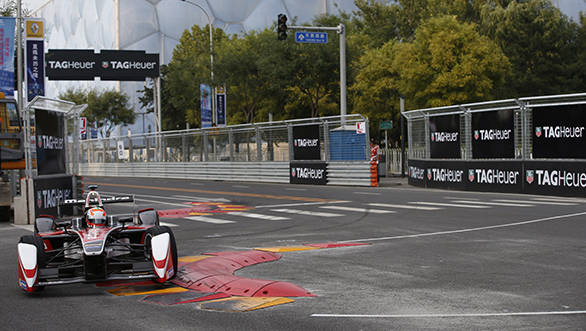 Could have been a better weekend for Mahindra Racing, but Chandhok's sixth place gave them their first points in the championship

For the tricolour it was a mixed bag. Mahindra Racing seemed to be on the pace, with Bruno Senna setting the fastest timing in the second non-qualifying practice session. However, his car had an issue with that saw him start the race 19th on the grid. Karun Chandhok started the race fourth. Despite some close racing, however, Chandhok lost places. His battery started overheating towards the end of the race, which meant he wasn't able to fend off attacks from his rivals, ending up eighth on track towards the closing stage of the races. With the two leaders crashing out, Chandhok was promoted to sixth overall, while Abt's penalty saw him finally finish fifth. Senna's bad luck continued as he crashed during the first lap of the race, bringing out the Safety Car, the rather stunning looking BMW i8. 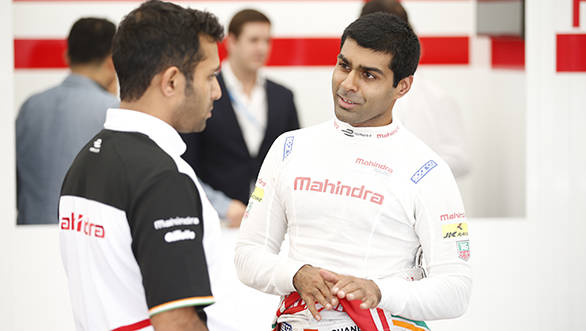 Here Chandhok talks to the team before the race

Overall, the first ever FIA Formula E race was something of a success. Despite the fact that the noise of the cars, a high pitched whine, was off-putting for most people, the racing was close. There is a good chance that the series will be a success after all, given that it is a short format of racing, with the entire event taking place on one day. But we'll have to wait for the second round at Putrajaya in Malaysia eleven weeks from now before we will know for sure.