Luca di Montezemolo steps down as president of Ferrari

Rumours of a rift within the Ferrari camp have long been doing the rounds, but they finally came out in the open after the Italian Grand Prix at Monza. Sergio Marchionne, chief executive officer of Fiat, the parent company of Ferrari, openly criticised Ferrari president Luca di Montezemolo for the poor showing of the Scuderia's Formula 1 team. And while at that point Montezemolo declared that he had no intention of leaving Ferrari, given the fact that he still had three years to go before his contract ran out, the 67 year old has confirmed his departure from the Italian marque in a statement issued on Wednesday. 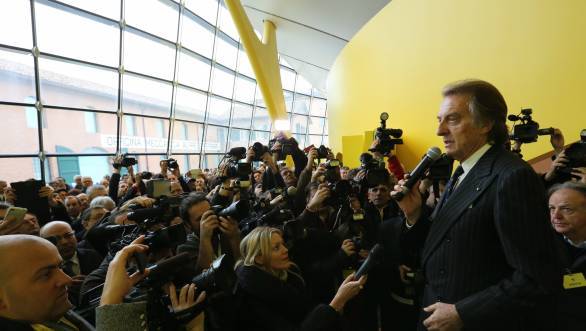 "Ferrari will have an important role to play within the FCA Group in the upcoming flotation on Wall Street. This will open up a new and different phase which I feel should be spearheaded by the CEO of the group [Sergio Marchionne]," Montezemolo said in the statement. He continued, "This is the end of an era and so I have decided to leave my position as chairman after almost 23 marvelous and unforgettable years in addition to those spent at Enzo Ferrari's side in the 1970s."

Montezemolo went on to thank the men and women from the Ferrari factory, as well as various members of the team who travelled to each racetrack and staff at Ferrari offices around the world, describing them as "the real architects of the company's spectacular growth."

"A warm farewell and my thanks also to all of our technical and commercial partners, our dealers across the globe and, most particularly, the clients and collectors whose passion I so wholeheartedly share. But my thoughts go also to our fans who have always supported us with great enthusiasm especially through the Scuderia's most difficult moments," said Montezemolo.

"Ferrari is the most wonderful company in the world. It has been a great privilege and honour to have been its leader. I devoted all of my enthusiasm and commitment to it over the years. Together with my family, it was, and continues to be, the most important thing in my life. I wish the shareholders, particularly Piero Ferrari who has always been by my side, and everyone in the company, the many more years of success that Ferrari deserves," were his final words in the statement.

Perhaps it was because of the dismal performance of the team, given that they haven't won a constructor's title since the 2008 season. There's no ignoring the fact though, that Montezemolo has been a key player in Ferrari's success over the years. To begin with, it was the combination of Montezemolo, driver Niki Lauda and designer Mauro Forghieri that revitalised the team in the mid-Seventies, bringing the championship home to the Scuderia. And, in the Nineties, when Ferrari had gone eight years without a championship success, it was Montezemolo who hired Jean Todt along with Michael Schumacher and Ross Brawn, leading to a complete scarlet wash over the course of the next few years.  All said, Montezemolo's absence within the Ferrari camp will indeed be felt.