The Motor Vehicle Act of 1988 has got new amendments, and the Lok Sabha has passed it. The penalty amount for breaking traffic rules has been increased exponentially. According to the new amendments, if a minor is caught driving and is also involved in a fatal accident, the parents or the guardians will be held responsible, and they will also be subjected to a three-year jail term in addition to the cancellation of the vehicle's registration.

The bill also proposes a 10-time increase in the compensation for accident victim's families. The amendments to the bill also cater to third-party insurance with a maximum liability cap of Rs 10 lakh in case of a death in a vehicle accident. There is also a Rs 5 lakh compensation in case of serious injury wherein the said amount will not be the upper limit and the affected family will still have an option to withdraw the case or appeal further.

Also, compensation for fatal hit-and-run accidents will see an eightfold increase to Rs 2 lakh. In addition, the bill also proposed setting up a Motor Vehicle Accident Fund that would offer insurance cover to all the road users in the country for a particular type of accidents.

The new bill proposes to amend 68 out of the 223 sections in the current Motor Vehicle Act. In order to improve road safety, the new bill has proposed to increase the penalties levied for traffic violations. The Motor Vehicle (Amendment) Bill 2016 received the Cabinet's approval in August 2016.

The new amendments will also take care of the bogus licensing as well as stop vehicle thefts with the help of e-governance, making the entire system online. This will help the entire process get completely transparent. In addition, if there is a delay in the issuance of licence documents, the officials in concern will attract punitive action against them. One can apply learner's licence online while, in case of approved permanent licence, the RTO will have three days to issue the final document to the applicant. Failing to which, action will be taken against the concerned RTO. The Motor Vehicle Act 2016 will also bring crash testing as well as certification of automobiles under its own purview.

Here is a look at the new penalty amounts that will be levied. 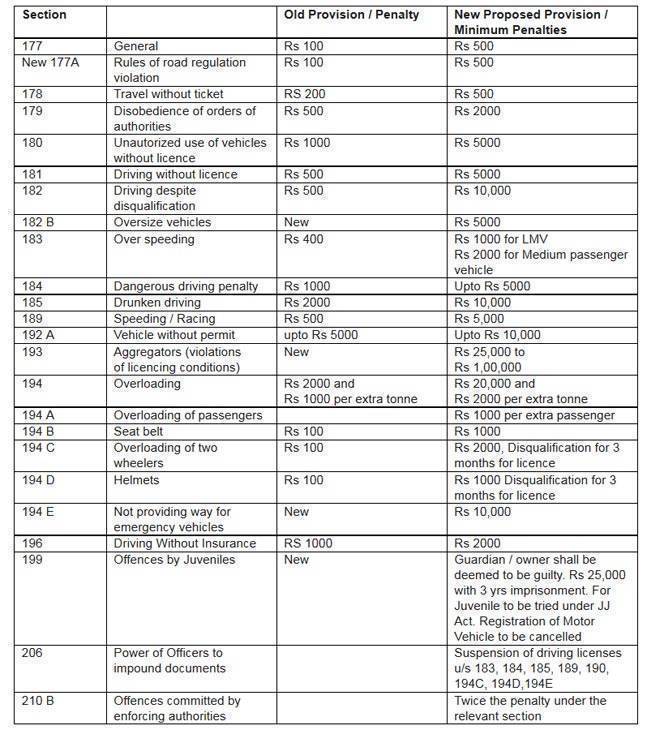