Nissan will hold the global unveiling of the Magnite sub-4m compact SUV shortly, and with it, kick off its NEXT transformation strategy, in India at least, a four-year strategy that aims to see Nissan introducing a slew of new models globally, including new products for India. The Nissan Magnite has been developed in India, for India, and will also be exported around the world and should prove to be quite the achievement for Nissan India. In the months leading up to this, the concept has been teased, interior sketches revealed, and the Nissan Magnite has even been spotted testing with light camouflage. With an expected price tag just above Rs 5 lakh, ex-showroom, it promises to blur the lines of the segment quite a bit too. Follow our live updates right here to see the Nissan Magnite global unveil event as it unfolds, and we have a special first look coming up right after the event. 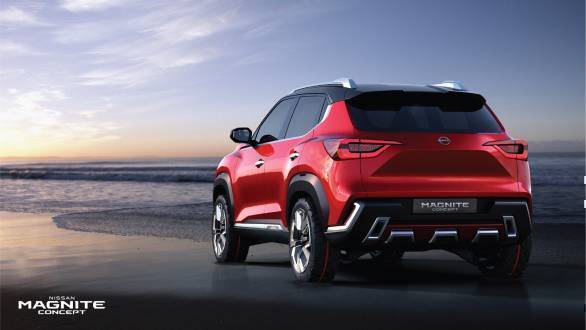 Watch our walk around video of the new Nissan Magnite here, with details of everything we know on it so far, and its expected pricing.

Check out our detailed first look of the Nissan Magnite below, including more pictures of the exteriors and interiors.

Read:  Nissan Magnite revealed: Everything we know so far 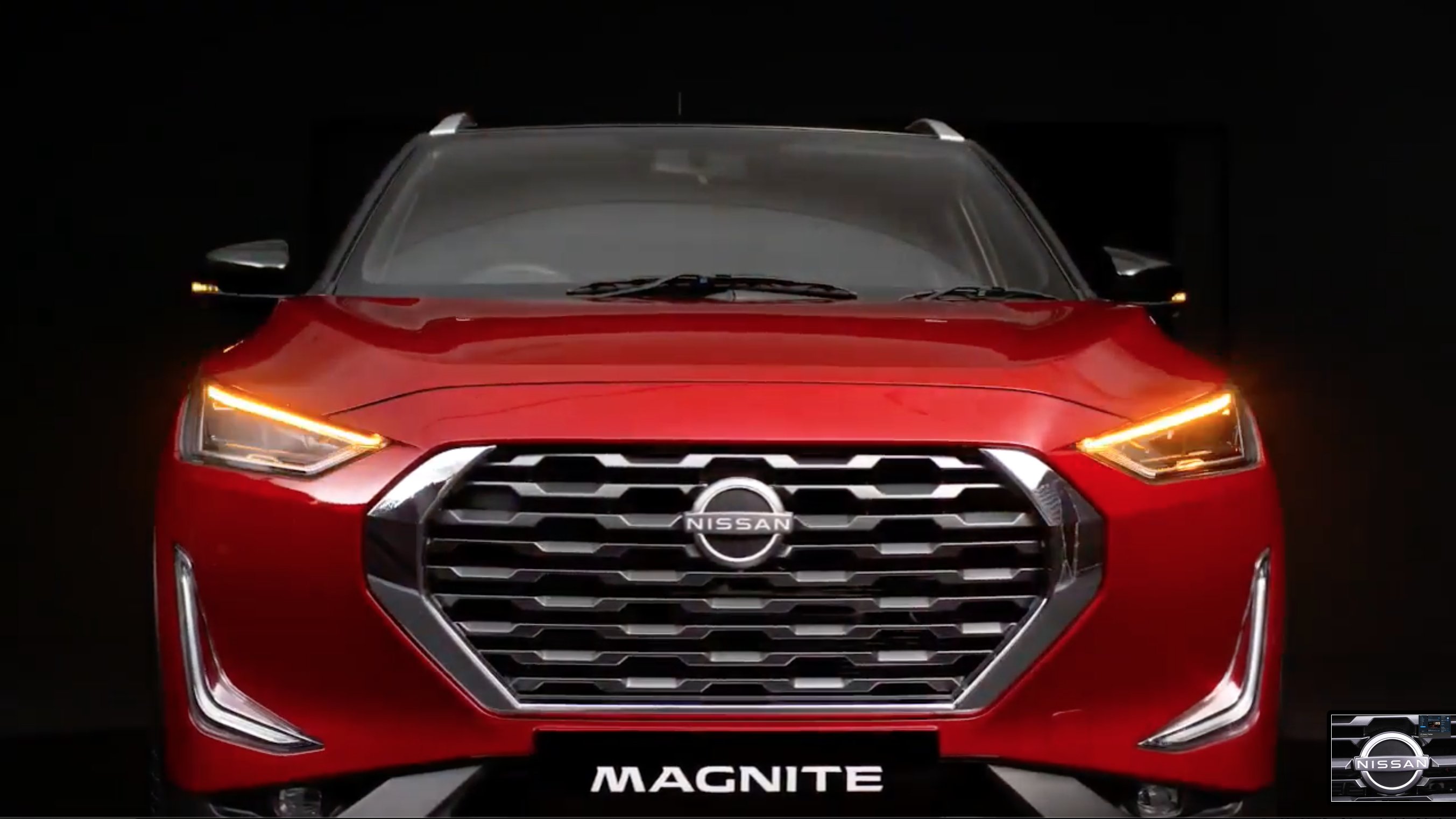 Our first look at the cabin of the Nissan Magnite. Stand-out features include a tyre pressure monitoring system, 7-inch digital instrumentation and 360-degree cameras - this apart from the 8-inch touchscreen infotainment screen. 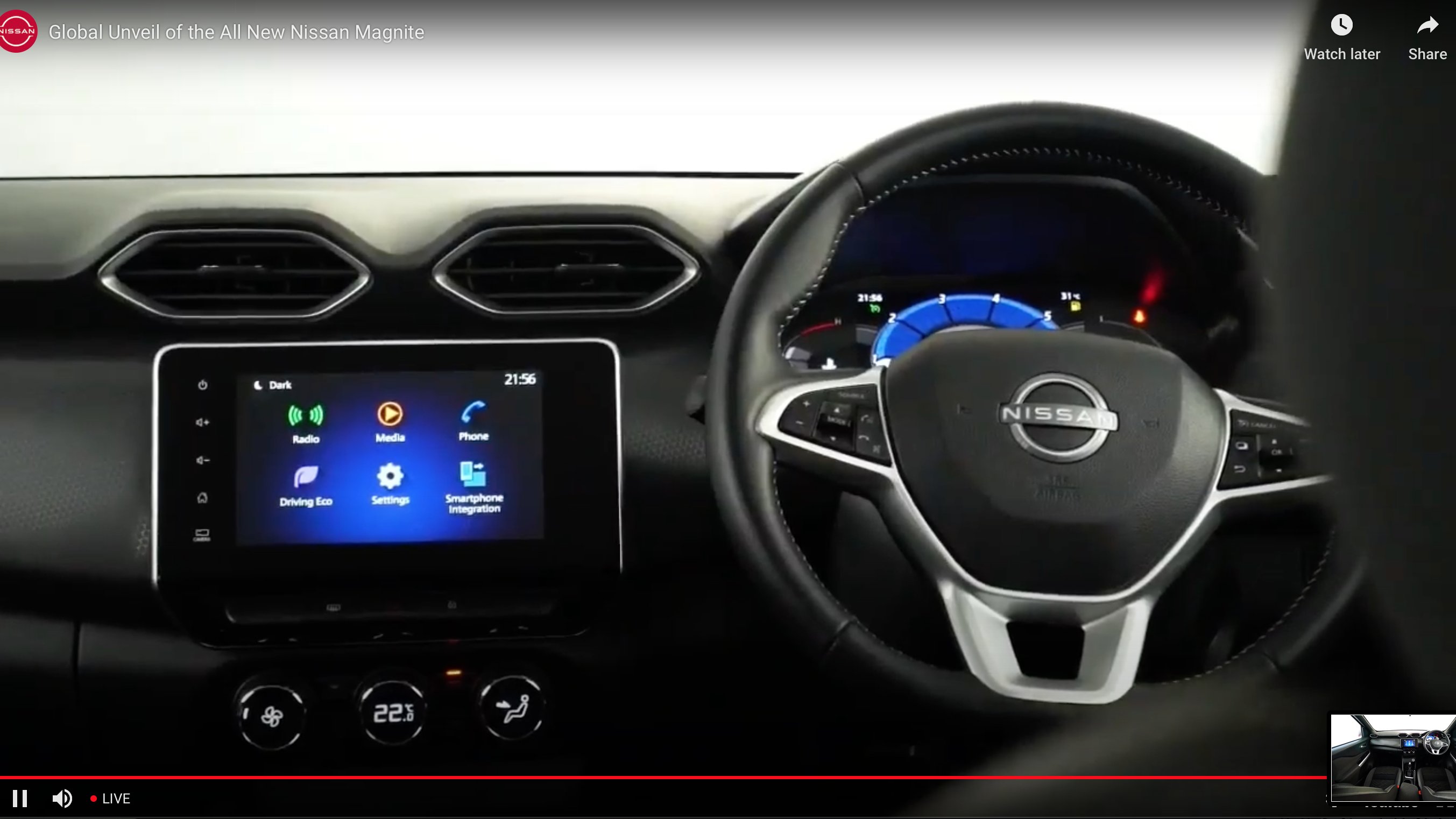 So, Nissan claim over 20 first-in-class or best-in-segment features for the Magnite compact SUV. Stay tuned for our first look going live at 1:30PM for a comprehensive walk around of the Nissan Magnite. 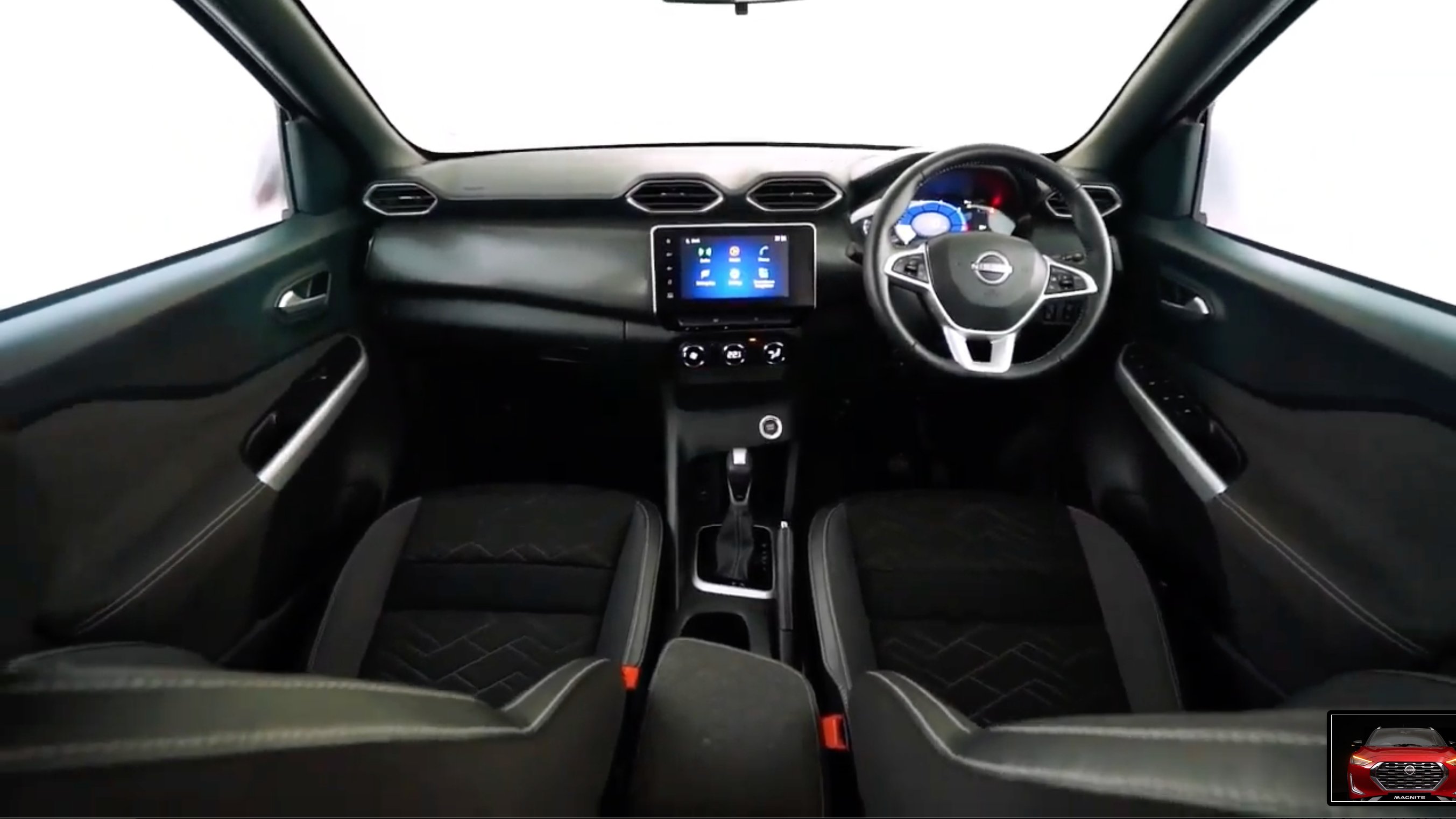 The Nissan Magnite should join the rest of the Nissan lineup in India on its digital showrooms, available for booking and purchase right from your home. 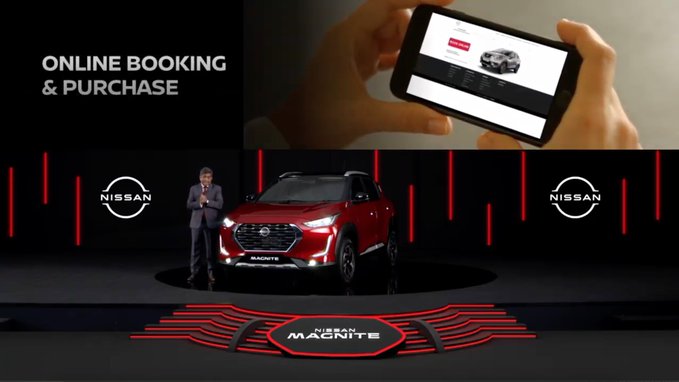 There you have it! The production version of the Nissan Magnite, with aggressive SUV styling, in line with what we've seen in the concept. 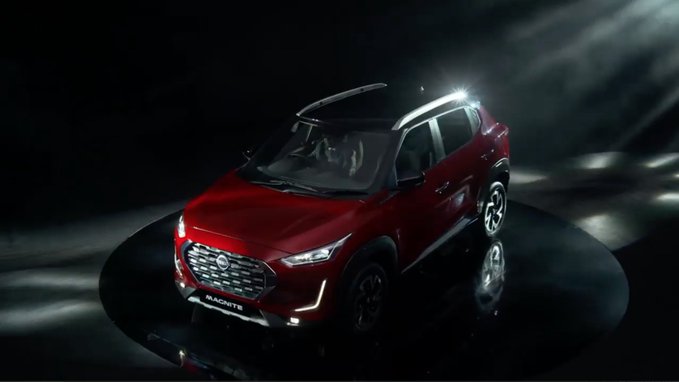 The cabin of the Magnite promises to be segment-leading in more ways than one, and we're told it will offer best-in-class shoulder room and rear knee room. Specifics on its wheelbase and how close it is to the Renault Triber, also based on a similar platform, have not yet been revealed. The Magnite's been spotted testing previously, and shows just how faithful to the concept the production model remains. The slim headlamps, flared bonnet and the noticeable haunches in the bodywork are all reminiscent of the Nissan Kicks and other international Nissan models. 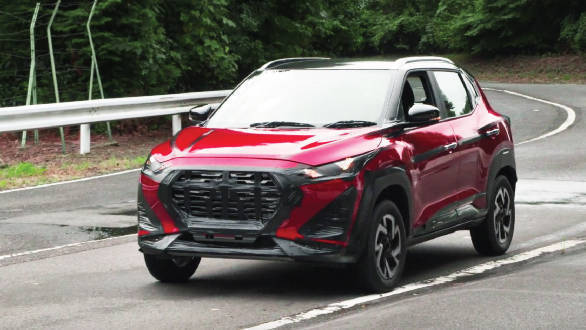 The Nissan Magnite concept shows clear SUV-intent, with exaggerated wheel arches and body cladding all around. The good news is that the production-spec Magnite is very, very close to the concept's styling. 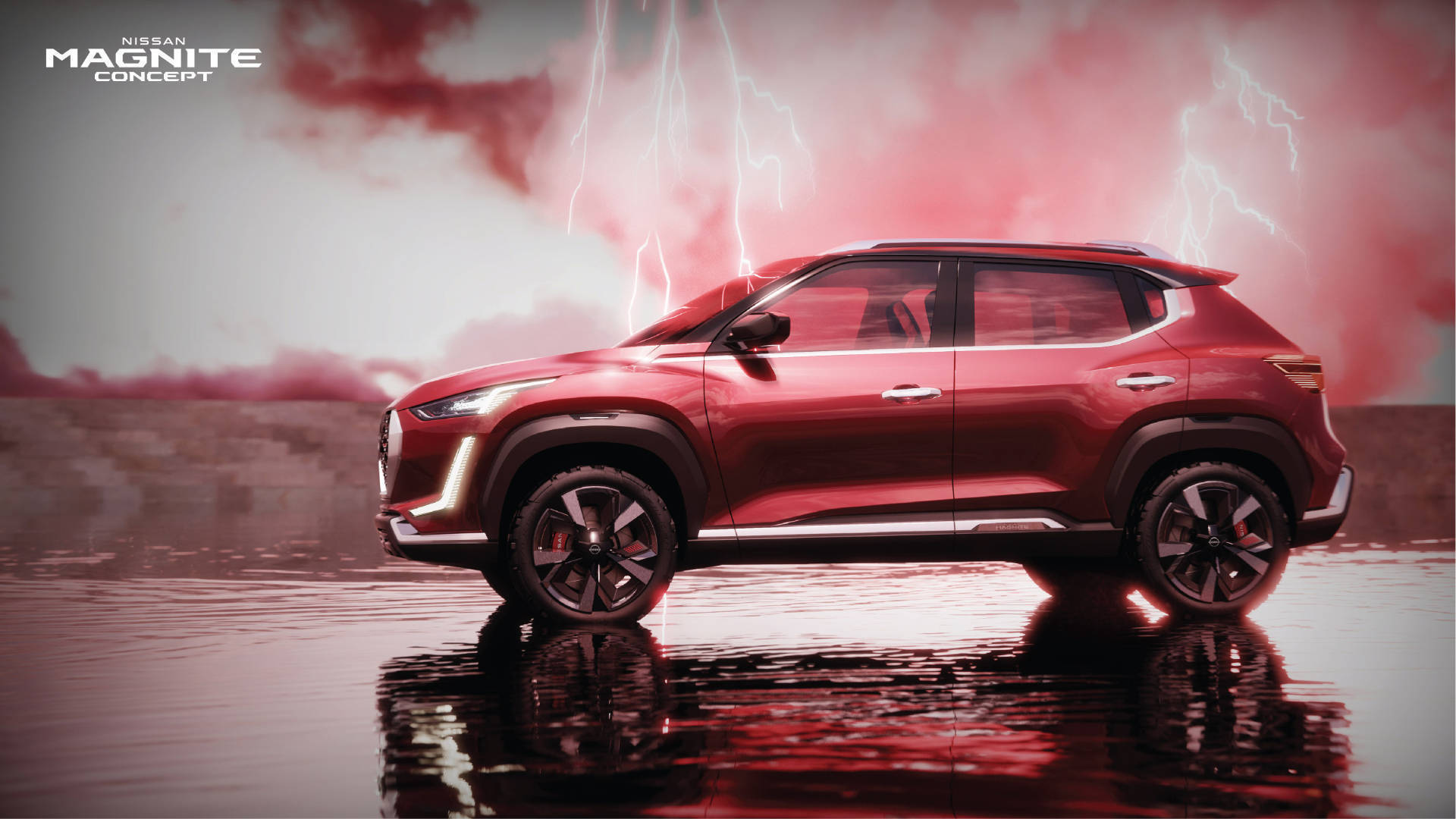 Headlined by bold, aggressive styling the Magnite goes beyond what its relatively humble CMF-A+ underpinnings would lead one to expect.