Skoda Auto is all set to launch its third offering for the year, the Kodiaq in India. The 2017 Skoda Kodiaq is an important product as it marks the debut of the automobile manufacturer in the premium SUV space. The Skoda Kodiaq is expected to lock horns with the Hyundai Tucson and the Volkswagen Tiguan. Skoda India dealers all over the country have already started to take bookings of the Kodiaq and we believe the deliveries of the same should begin from this week onwards. Skoda is launching the Kodiaq with its 2.0-litre, four cylinder diesel engine only, mated to its DQ-500 seven-speed DSG gearbox. The engine offers 150PS and 340Nm. In our first drive review of the 2017 Skoda Kodiaq, we felt that the engine is extremely refined, and despite being a diesel doesn't make itself audible inside, while being quick to build revs. 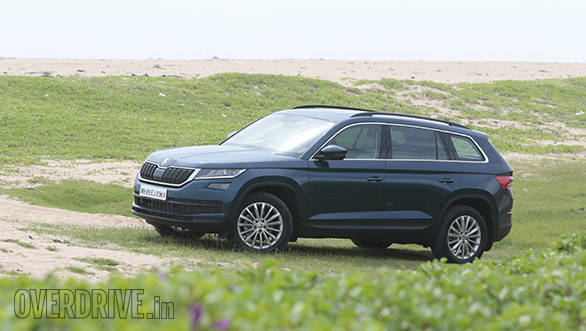 Based on the Vision S Concept, which was showcased at the Geneva Motor Show, the Kodiaq carries a few design cues of the concept. The grille, headlamp shape and fog lamps are similar to the concept. The side profile on the Kodiaq bears the same belt line crease that runs from the front fender, all the way up to the rear fender and the wrapping around the boot. A few design elements in the interior are inspired by the flagship sedan, the Superb - check out the image gallery.